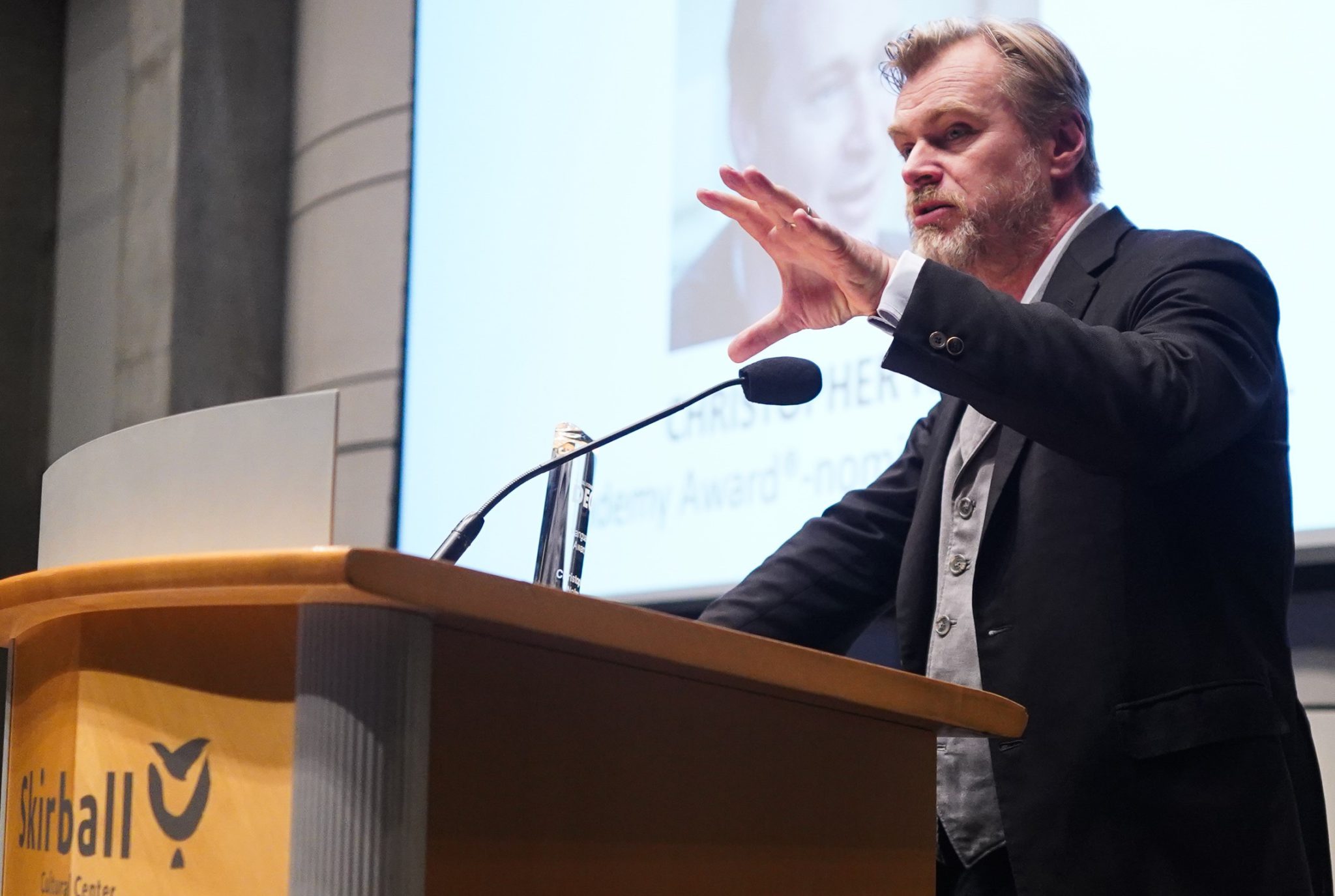 Posted at 07:16h in Blog by Marcy Magiera

“It’s fantastic for the filmmaker to have a physical media that eliminates the variabilities, the compression and so forth. That’s sort of the gold standard that streaming is going to have to reach.”

Warner Bros.’ Ron Sanders on November 6 presented Academy Award-nominated filmmaker Christopher Nolan with the inaugural DEG Vanguard Award during the 4K Ultra HD Summit at Los Angeles’ Skirball Cultural Center. The award recognizes Nolan’s place at the forefront of filmmakers using groundbreaking technology to deliver increased scale and resolution, enhanced color and immersive audio to film audiences both in cinemas and in the home theater environment. Nolan has been a longtime advocate of the best home viewing experience available to consumers.

In his acceptance, Nolan talked about the impact home viewing has on the way he shapes the narrative structure of his films and the role new technologies—specifically 4K Ultra HD with HDR—play in conveying his creative vision to home viewers.

Below is a transcript of Nolan’s acceptance remarks, lightly edited for clarity.

My relationship as a filmmaker with home video dates back to one cold evening in 1981, when my family first tried to use a top-loading VHS player to record. Somebody had broadcast all the James Bond films. We put the tape in — kachunk, kachunk, kachunk — that sound effect won’t mean anything to anybody under 40, but somebody will know what I’m talking about. We watched the film through, loving it. And then pleaded with my mother, saying “Can we just watch the speed chase?” We really wanted to, so we hit rewind and it wound and wound, with this high whine, until it sounded like the whole room was going to explode. It stopped at the beginning and we hit play—for the first time, there was this idea where you could revisit a piece of film and actually control the timing of it—and we were a little confused because the picture came up and it was a church and poor people singing. Then we realized we’d actually recorded Songs of Praise on BBC Two. So right then I learned the first lesson of VCRs, which was that you can record something and watch something else at the same time.

But, devastated though we were, that’s speaking to the fact that I’m really the first generation of filmmaker who grew up with home video in the form that we know today, starting with VHS, and the idea that you could have access to a film and you could go back and look at different parts of it and have a different kind of relationship with it.

Disney, for example, were some of the first people that realized that you could add visual density to films because you have kids and more importantly, parents, who would watch these films dozens of times in the home so you could afford to put more on the visual density and little things in the corner of frames that you experience the second or third time around.

I don’t think it’s any coincidence that when I first came to Hollywood, my generation of filmmakers who were starting out then just as DVD was becoming the dominant format were very influenced by our relationship with that new way of looking at films— with chapter selection, and the random access that format allows you. I don’t think it’s a coincidence that a lot of us at the time, myself included, started exploring various different narrative structures. I think the things are very related. I think my experience with home video has always informed my filming both narratively and technically.

When we came to make The Dark Knight, and I had long had an aspiration to shape the narrative of the actual film using IMAX technology, it was actually the guys at home video that I went to— [Warner Bros. Entertainment Chairman] Kevin Tsujihara, who at the time was in charge of all things digital at Warners. I went to them and said this is going to cost money if we want to do this, but you have this new home video format Blu-ray with its high-def quality. I think you’re going to be able to see the difference between regular 35 millimeter and IMAX. You can see the added sharpness.…we can use the full aspect ratio, 16:9, and he was on board for that. They actually financed the shooting of the IMAX sections of that film. And once again that speaks to the strong relationship there has always been for filmmakers between home video and the initial theatrical release.

So, Dunkirk for example, we shot almost the entire film on IMAX and the rest of the film on 65 [millimeter]. I was often asked whether the sort of spectacle of it, and shooting on these very high-quality formats, whether that was a sort of dumbing down the theatrical experience, but the answer is more complicated: Yes and no.

In a way it is, but in another way, you know that that post-Blu-ray, now with 4K UHD, you’re going to be able to produce a home video version of your film with a format that will actually show off to the best effect all of the effort and money put into the technical presentation of the theatrical. So, a lot of my interest in visual spectacle, in the technical aspects of filmmaking over my last few films, is definitely driven and enhanced by the idea that at the end of the day the people at home will be able to experience a very high-quality version of the film.

When we came to 4KUHD with HDR—that’s a bit of a mouthful—one of the things we did is we decided to put the full theatrical sound mixes of the film, because what we found is people’s systems got better and better and better to the point where it’s worth really trying to get as close as possible to the theatrical presentation of the film that we worked so hard on.

The way we made the video masters — we applied this thinking later to Kubrick’s masterpiece 2001, which has a very spectacular 4K coming out — what we would do is just project the material and then project the video and really try to match it as closely as possible and the added bandwidth the HDR, bit depth and color and so forth it really puts us in a position where we can get closer and closer to a theatrical print in the home. It’s really exciting that all that work — an increasing amount of work — carries through to the home presentation.

Really, since the 1950s, TV and home video used to represent a translation of our work into the home. But the amazing technical advances of the last couple of decades — and the last 10 years in particular —now give us the opportunities to preserve our work and the work of filmmakers of the past and really try to maintain the creative intent.

We’re  really being able to do that and having the technology to be able to do that and there is potential in talking to the television manufacturers, and everybody really, about how we can preserve the original creative intention through to the way people see it in the home through streaming or on disc.

I’m a big fan of the 4K discs because it removes the uncertainties of streaming. I think 4K streaming is going to be very, very important to all this and I’m very, very impressed by the quality of it. It’s fantastic for the filmmaker to have a physical media that eliminates the variabilities, the compression and so forth. That’s sort of the gold standard that streaming is going to have to reach. That’s very reassuring to me as a filmmaker.

The reason that myself and other filmmakers are starting to appreciate engagement with television manufacturers is because we see a tremendous opportunity here to really be able to present our work in the home in a way that has never been possible before with the standards of excellence and the quality that was absolutely unthinkable 15 years ago. So, it’s very exciting, very exciting times for rapid technical change and incredible changes in format.

And so, I’m very honored to be here receiving the Vanguard award, but it also gives me an opportunity to say thank you to all of you for all the great work you do in positioning filmmakers like myself to be able to present our work to wider and wider audiences in a way that we can be proud of.