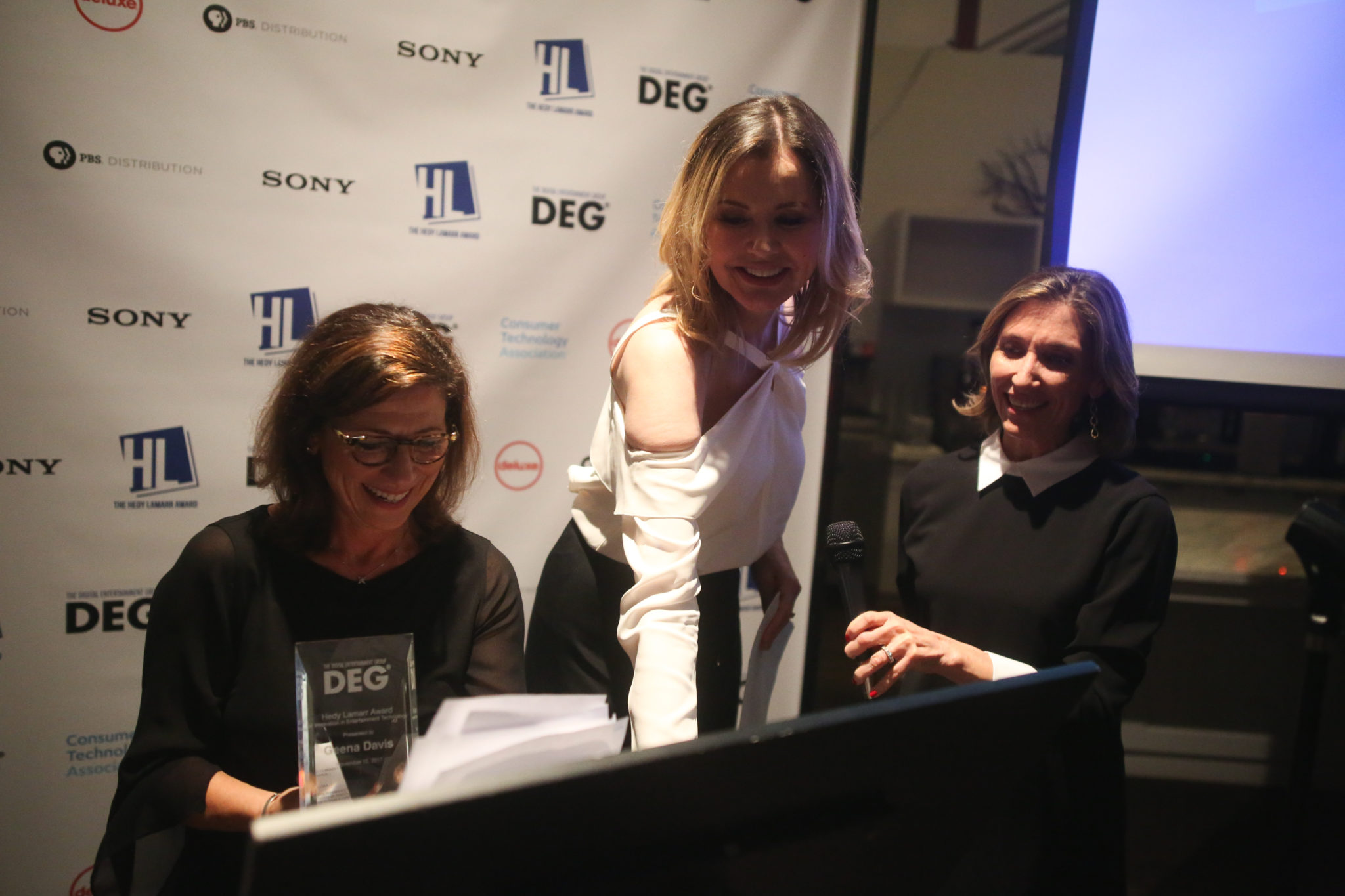 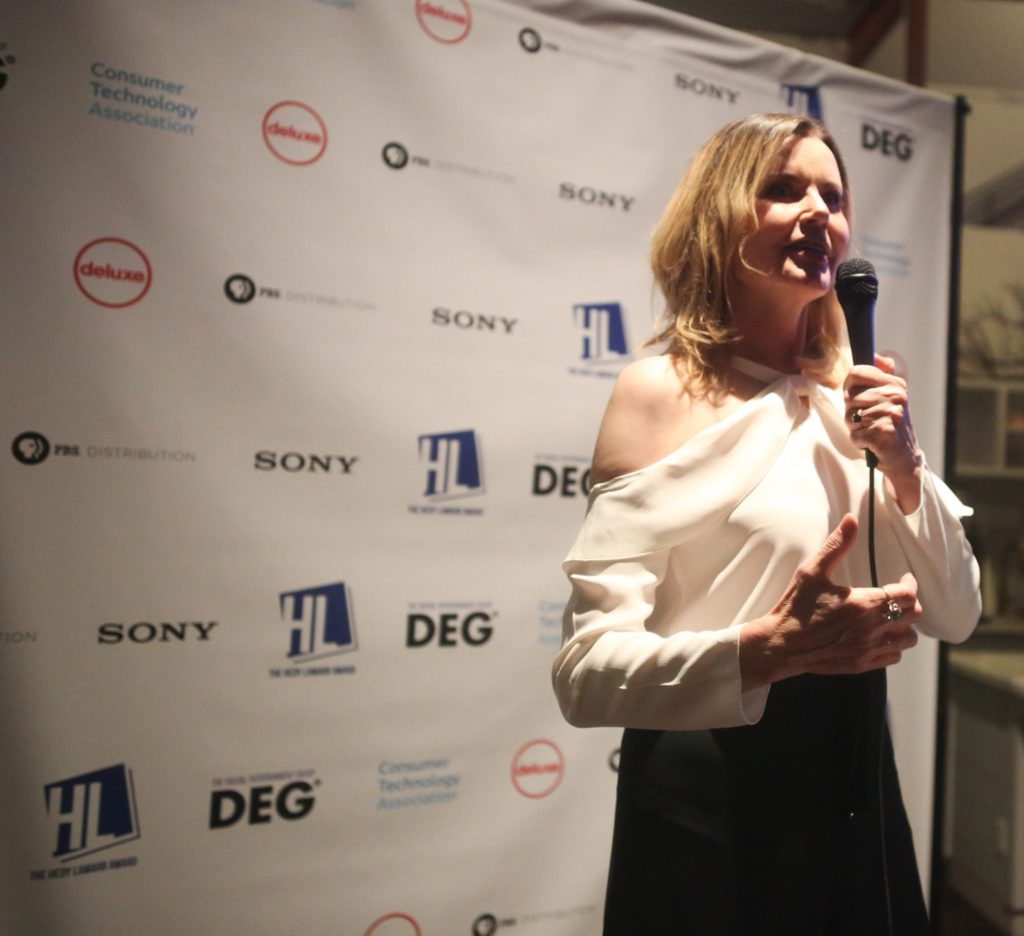 DEG on Wednesday evening presented the inaugural Hedy Lamarr Award for Innovation in Entertainment Technology to Geena Davis, Founder and Chair of the Geena Davis Institute on Gender in Media (l.)  Also recognized with the Hedy Lamarr Achievement Award for Emerging Leaders in Entertainment Technology were scholarship recipients Johanna Baumann (winner) of the University of Michigan and Carolyn diLoreto (finalist) of USC. To honor Lamarr, the Awards seeks to recognize and commemorate female industry leaders who have made a similar impact in the field of entertainment technology.

During the event, DEG President Amy Jo Smith announced that nominations for the 2018 Hedy Lamarr Awards for executives and students are now being accepted.

In presenting the Hedy Lamarr Award to Davis, her best friend and college roommate, Nina Tassler, Senior Advisor and Former Chairman, CBS Entertainment, described Davis as a woman of firsts — including first in their class at Boston University to win an Academy Award (1989 Best Supporting Actress for The Accidental Tourist), and first to win the Hedy Lamarr Award.

Davis, like Lamarr, is an actress who has become almost more well known for her work outside of acting.

Through her Geena Davis Institute on Gender in Media, Davis is successfully influencing film and television content creators to dramatically increase the percentage of female characters—and reduce gender stereotyping—in media targeting children 11 and under. The Institute is the only research-based organization working within the industry to engage, educate, and influence content creators and audiences about the importance of eliminating unconscious bias, highlighting gender balance, challenging stereotypes, creating role models and scripting a wide variety of strong female characters in entertainment and media.  Last Fall, the Geena Davis Institute on Gender in Media revolutionized the field of gender in media research with the groundbreaking launch of its machine learning research tool, the GD-IQ (Geena Davis Inclusion Quotient), in partnership with Google and developed by the SAIL laboratory at USC Viterbi School of Engineering. The GD-IQ is able to measure screen and speaking time through the use of this software which enables researches to uncover unconscious gender bias. Before the GD-IQ, this data could only be collected manually. Davis also launched and serves as Co-Founder and Chair of the Bentonville Film Festival, which provides a platform to significantly boost the commercial value of content produced and starring minorities and women.

Also present at the event, hosted by Deluxe at the Cafe at Method | Company 3 in Santa Monica, were Anthony Loder, son of Hedy Lamarr, and Adam Haggiag, producer of the documentary Bombshell: The Hedy Lamarr Story. Loder, with Smith, presented certificates to the student award winners. Haggiag presented a clip from Bombshell, in which Lamarr describes a time when she studied birds and fish to create a more aerodynamic airplane design. 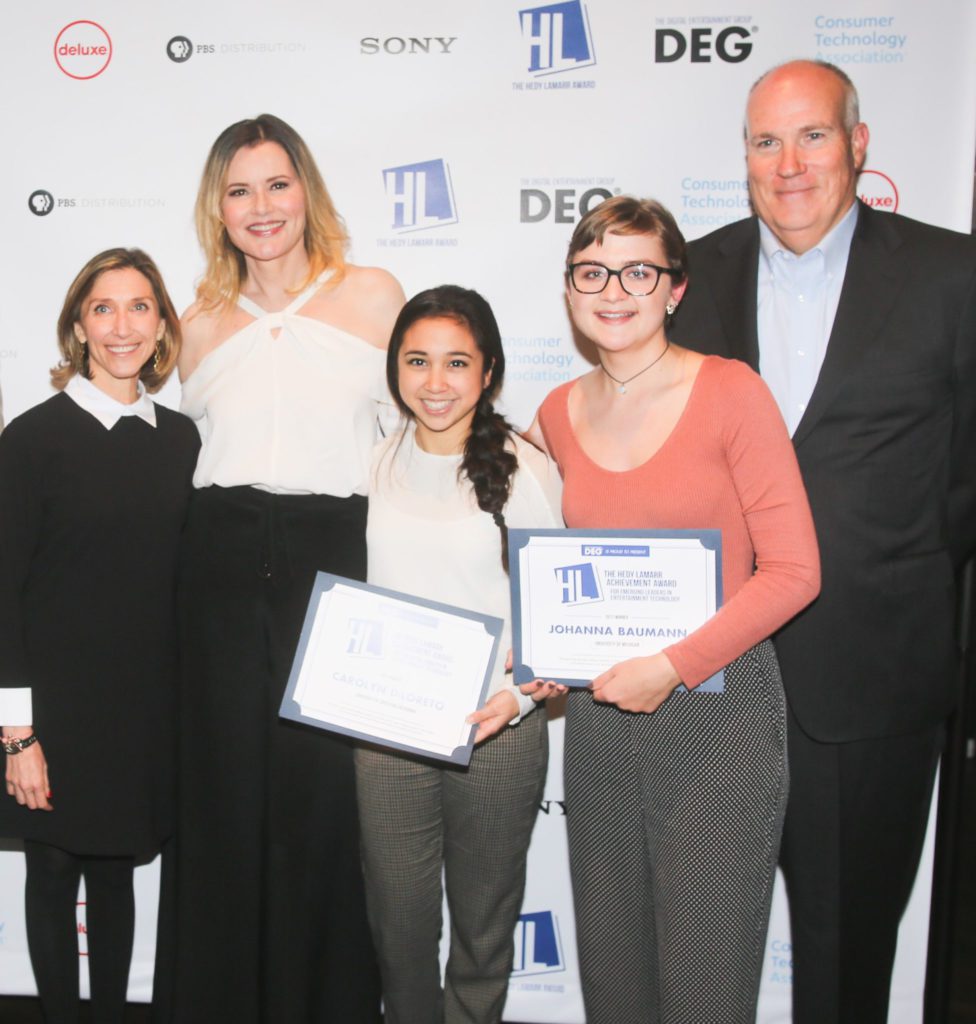 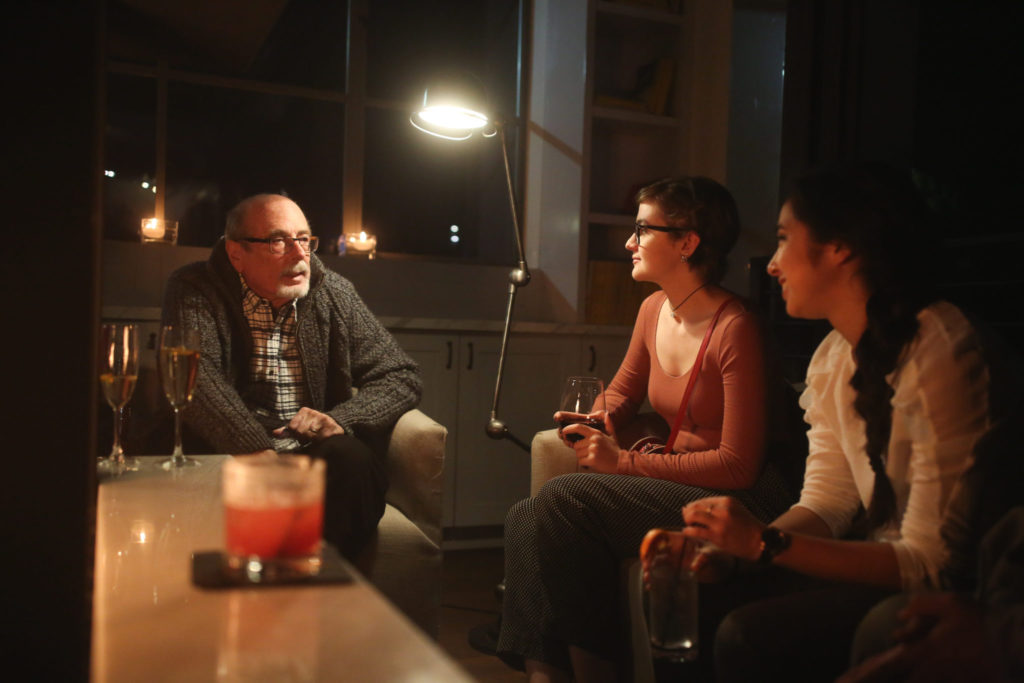 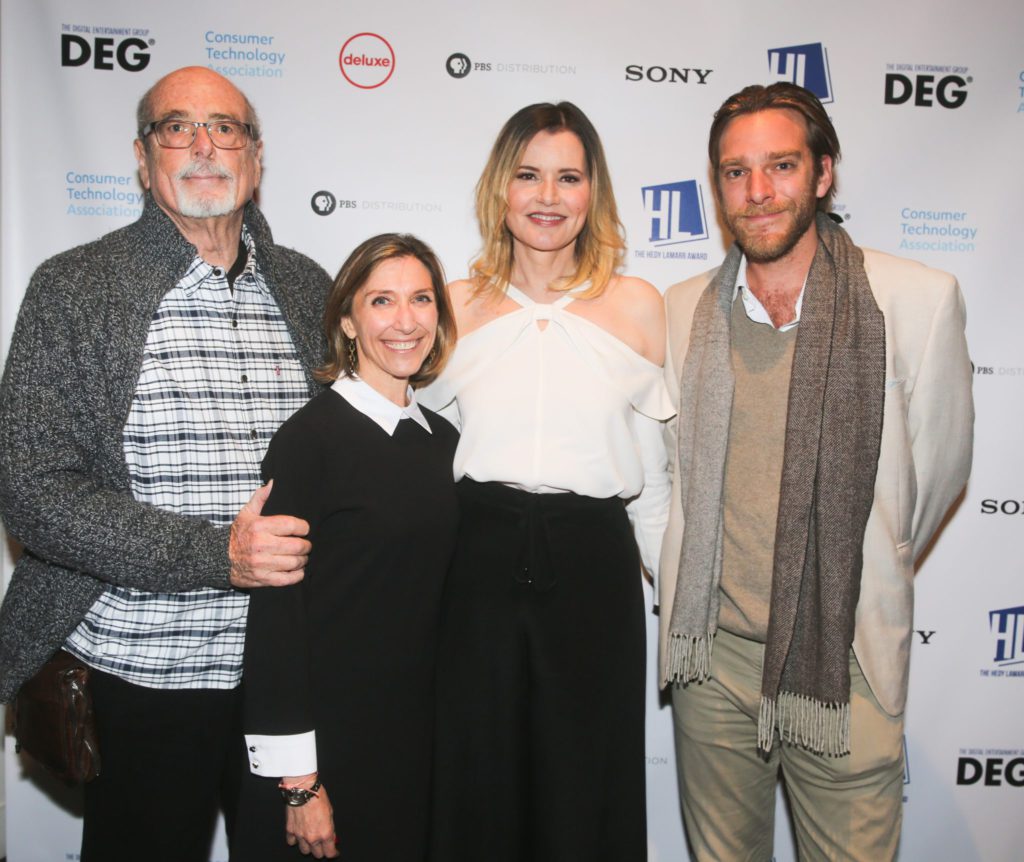 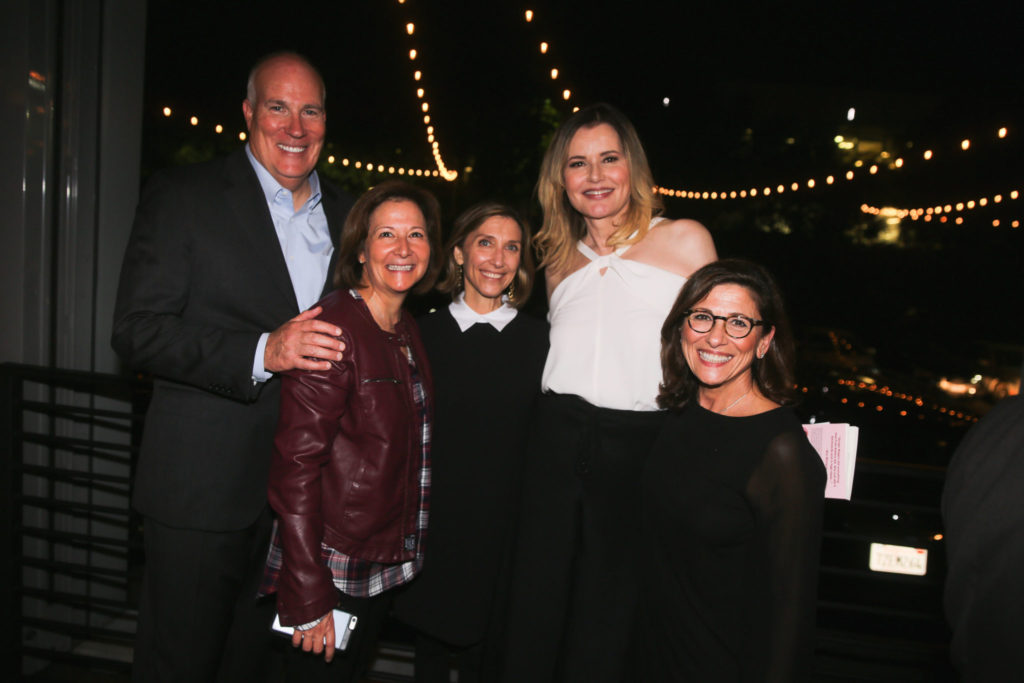 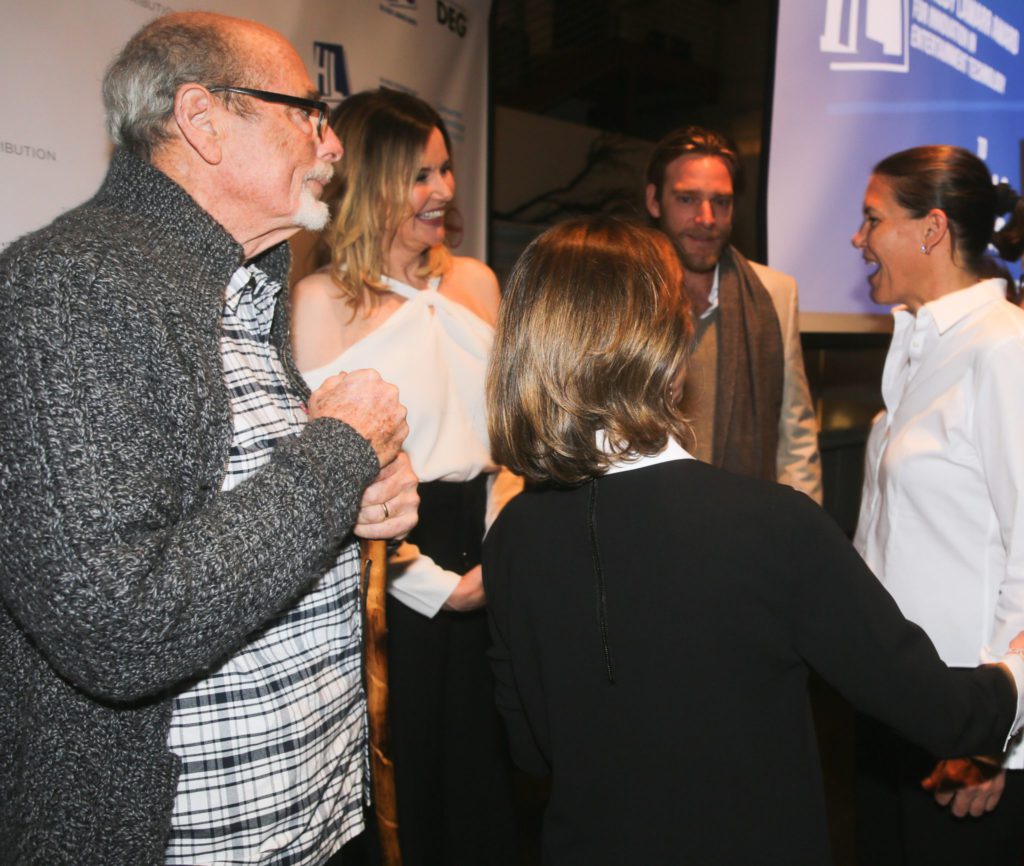 (l. to r.) Loder, Davis, Smith and Haggiag, discuss ‘Bombshell’ with Andrea Downing of PBS, a production partner on the film.