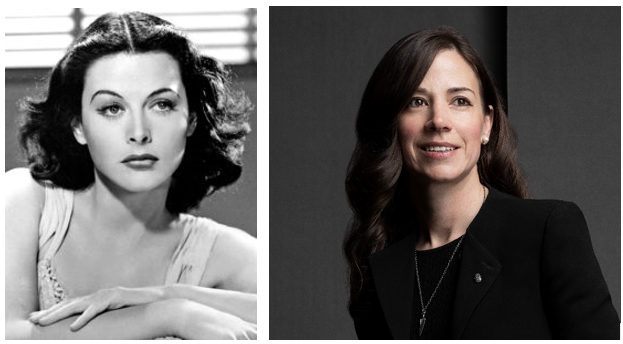 Above: The award inspired by inventor and actress Hedy Lamarr (l.) will be presented to Dolby’s Poppy Crum (r.) in 2021.

A distinguished female leader in neuroscience and technology, Poppy reflects DEG’s efforts to promote innovations in entertainment and technology and to recognize women who are making advancements in these fields.  At Dolby, Poppy is responsible for integrating neuroscience and data science into algorithm design, technology development and technology strategy.  She is also an Adjunct Professor at Stanford focusing on the impact of modern technologies and immersive environments such as augmented and virtual reality on neuroplasticity and learning. Poppy is recognized for her creativity, future vision and excellence to develop and champion technologies that promote increased immersion and success in the translation of the creative and technological intent of an experience. Her work has also supported significant directions for diversity and inclusion in building technologies that are personalized to benefit all individuals. 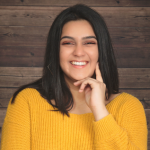 The 2021 Hedy Lamarr Achievement Award for Emerging Leaders in Entertainment Technology, honoring a female college student whose studies in the fields of entertainment and technology have shown exceptional promise will be presented to Shambhavi Mishra, an undergraduate student at Carnegie-Mellon University who is double majoring in Humanities Analytics and Music Composition.

Brianna Seaberg, a Communications major at the Annenberg School for Communication and Journalism at the University of Southern California (USC), was named this year’s runner up.

To encourage and enable these highly motivated students to pursue opportunities in entertainment technology, both will receive a financial award to continue their education.

The awards will be presented during an online event on December 6, 2021.

“It is an honor to recognize Poppy Crum, an outstanding female leader in neuroscience and technology, with this year’s Innovation Award.  She is a true visionary working to better lives and society through the development of immersive technologies,” said Amy Jo Smith, President & CEO, DEG.  “It is also a great pleasure to present the Achievement Award to Shambhavi Mishra to support her work toward ensuring that all voices and perspectives across the industry are heard equally.  The 2021 Hedy Award winners are remarkable women in their field who clearly share Hedy’s passion for innovation.”

“I am thrilled to accept the Hedy Lamarr Innovation Award from DEG”, said Poppy Crum, Chief Scientist at Dolby. “This honor represents a dedication to excellence in the field of technology initiated by Hedy Lamarr that continues to be led by many outstanding women who are committed to driving advancements that enhance our world and the experiences we have in it.  It is truly gratifying to be recognized among them.”

Austrian-American actress Lamarr was a Hollywood legend who is best known for her roles in film classics including Samson and Delilah, The Strange Woman and Tortilla Flat. She was also a lifelong inventor whose innovative work included pioneering “frequency hopping,” which became the foundation for spread spectrum technology. Conceived by Lamarr and composer George Antheil for radio guidance systems and patented in 1942, this highly secure technology resists interference and dropout, and is utilized today for a variety of cellular, Wi-Fi and Bluetooth applications.

To honor Lamarr, the Innovation Award seeks to recognize and commemorate female industry leaders who have made a similar impact in the field of entertainment technology. Past honorees include Geena Davis, Founder and Chair of the Geena Davis Institute on Gender in Media; Nonny de la Peña, CEO of Emblematic Group; Dean Willow Bay of the USC Annenberg School for Communication and Journalism; and Sara DeWitt, VP of PBS KIDS Digital.

To determine the award winners, DEG enlisted its Canon Club Advisory Board, which comprises a cross-section of leaders representing the entertainment, technology, IT and consumer electronics industries. Among other factors, the judging panel based its decisions on the candidates’ embodiment of the following principles: Innovation, Engagement and Excellence.

Poppy Crum, Ph.D., is a neuroscientist and technologist. She is Chief Scientist at Dolby Laboratories and an Adjunct Professor at Stanford University in the Center for Computer Research in Music and Acoustics and the Program in Symbolic Systems. Poppy is on a mission to build technologies that break out of one-size-fits-all solutions. She believes the technology we surround ourselves in everyday, paired with machine learning and artificial intelligence, can uniquely enhance human capability, wellness, storytelling and our interactions with each other and our environments.

Poppy is a U.S. vice chair to the International Telecommunication Union (ITU), a member of the Consumer Technology Association’s Board of Industry Leaders and Board of Trustees, and a former member of the Defense Science Research Council (DSRC) of DARPA. Prior to joining Dolby Laboratories, Poppy was research faculty in the Department of Biomedical Engineering at Johns Hopkins School of Medicine. Poppy is a fellow of the Audio Engineering Society. She is a 2018 recipient of the Advanced Imaging Society’s Distinguished Leadership Award, a 2017 recipient of the Consumer Technology Association’s Technology and Standards Achievement Award for work towards the introduction of over-the-counter hearing-aid devices and has been named to Billboard’s 100 most influential female executives in the music industry and TV Technology’s “The Watch List” 2020. Poppy is an author connected to more than 37 patents. She is a frequent speaker at events including TED, SXSW, HPA, IEEE, TNW and WIRED, on topics related to the intersection of human experience, AI, sensory data-science and immersive technologies.

Shambhavi Mishra, a member of the BXA Interdisciplinary program at Carnegie Mellon University (CMU) with a double major in Humanities Analytics and Music Composition, has a goal of launching an entertainment production company that will highlight unheard voices in the global entertainment industry.  While at CMU she has composed, produced and directed concerts, audio performances, sound-art installations, and stop-motion animated shorts.  In June 2021 Shambhavi premiered a multimedia opera entitled “Angels in the House,” a new historical fiction opera focused on women’s rights that she composed and co-directed. Additionally, she serves as President of the CMU Student Advisory Board and Corresponding & Recording Secretary of the Sigma Alpha Iota chapter.

Brianna Seaberg, a dean’s list student studying Communications at USC, has served as Co-president of the USC REACH social media club and as a member of the Communication Women Leadership Society.  She has held internships at ViacomCBS, TikTok, Fullscreen, and most recently in the social media group supporting HBO Max.