DEG will present its Year-End 2020 Report, including additional commentary on the year, during the online DEG Expo on Wednesday, January 27, at 10:30 a.m. Pacific. Members, media and analysts are welcome to attend.  Click here  for more information or to register.

Overall Market Up 21% to a Record $30 Billion, Led by Subscription Streaming and Digital Transactions

Consumers spent more than $26.5 billion on digital entertainment purchases (EST), rentals (VOD) and subscriptions in 2020, an increase of more than 32 percent over full year 2019, driven in part by stay-at-home orders. During the year, transactional demand was strong across purchase and rental models, with spending rising 16 percent on EST and 18 percent on VOD** for full year 2020. Subscription streaming rose 37 percent for the full year with the introduction of major new services including HBO Max and Peacock.

Across genres and platforms, consumer demand for movie and TV content delivered to home and personal devices increased as pandemic precautions remained in place for nine months of the year. In the fourth quarter, total spending on digital entertainment services rose more than 27 percent and spending on subscription streaming jumped 33 percent over the same period in 2019.

Overall U.S. consumer spending across digital and physical home entertainment formats in 2020 was $30 billion, a 21 percent increase from the almost $25 billion consumers spent in 2019. In the fourth quarter, overall consumer spending rose almost 16 percent, to $7.8 billion, an increase of more than $1 billion over the same period in 2019.

Among the highlights for the Fourth Quarter and Full Year 2020:

*Please note, these numbers are preliminary. Please contact DEG for an updated version in February.

** VOD spending does not include premium Video-on-Demand (PVOD). Including PVOD would increase the total consumer spend on digital.

For reference, DEG provides a list of digital entertainment terms and definitions on its web site here. 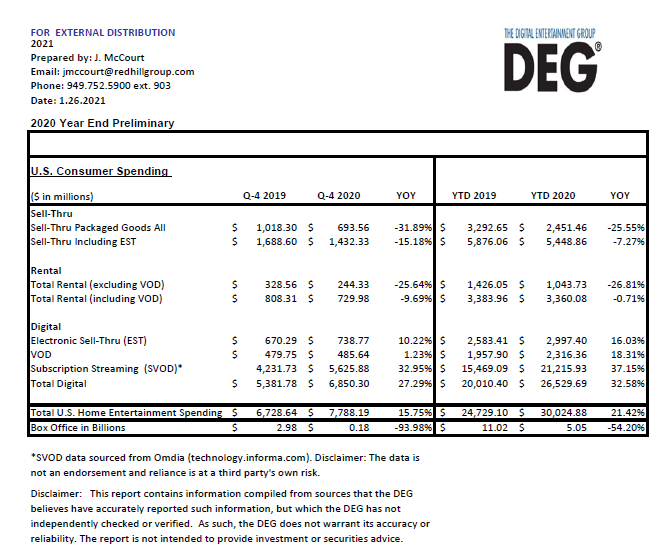