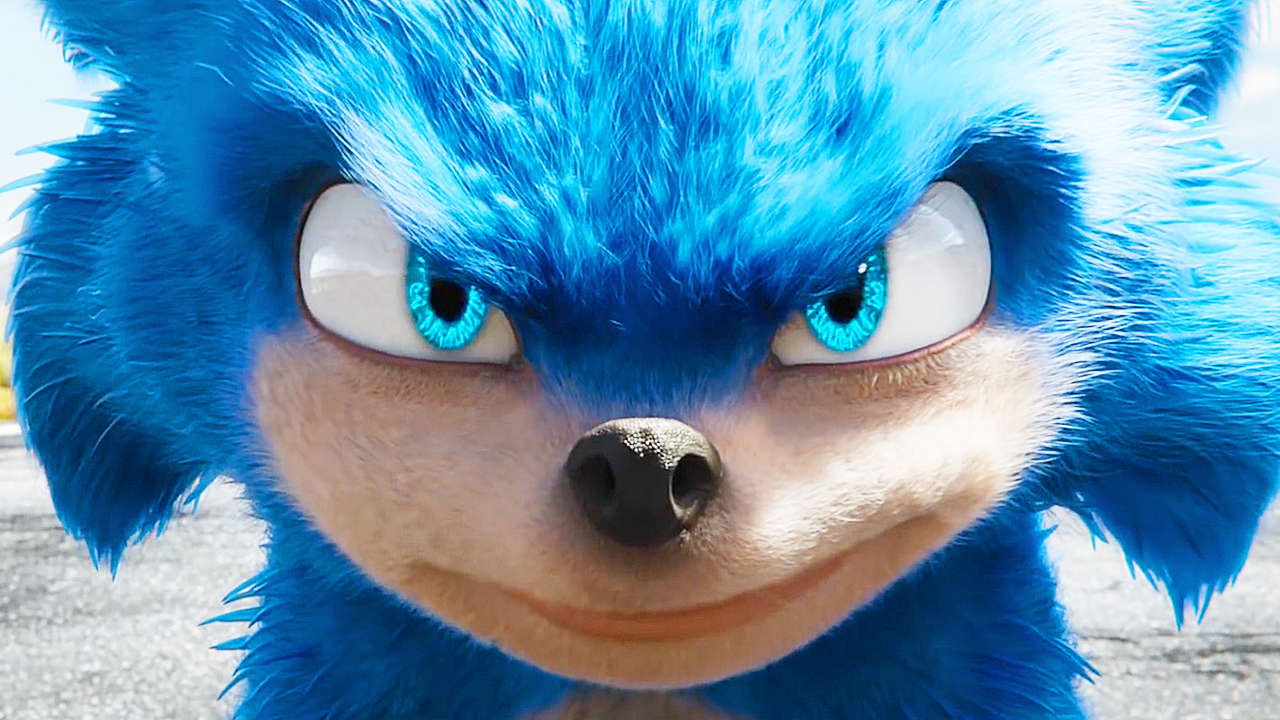 London, July, 22, 2020 | Data released by the British Association for Screen Entertainment (BASE) and compiled by The Official Charts Company (OCC) has shown that consumer spend on digital film to buy and keep grew by more than 87 per cent during the lockdown period to a year-to-date value of £113 million to the end of June as Britons turned to digital retailers[1] to access entertainment content at home. Examining the wider transactional video market, Kantar further reports that 1.8 million new customers either bought or rented digital content during lockdown, taking the number of consumers transacting digitally in that period to a record high of 5.5 million[2].

In the 12 week period from March 28 when the Government introduced its Stay Home policy, according to OCC data (which only considers bought as opposed to rental product) digital purchase accounted for 51 per cent of the market as consumers engaged with the depth of range of titles available through digital home viewing options, with 49 per cent still attributed to sales of physical media (DVD, Blu-ray and 4K UHD). While growth in digital ownership was already evident, with its share at 29 per cent in the same period in 2019 and at 37 per cent in the 12 weeks prior to lockdown, it is clear that digital video has made huge gains at a time when many of us were forced to stay home. 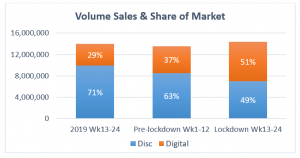 Falling disc sales prior to the pandemic translated to an overall decline in the transactional video market, but the performance of digital transactional in lockdown has reversed that trend, with whole video market growth of 6.9 per cent in value terms delivering a significant 21 point swing. During the lockdown period, disc proved to be remarkably resilient even in the context of many bricks and mortar retailers either being forced to close or to pivot to focus on essential provisions. Even with those challenges, with premium formats like Blu-ray and 4k UHD continuing to appeal and an increased engagement from consumers with TV box sets on disc, the disc market maintained a predominantly flat value position year-on-year

Performance across the market can to some extent be attributed to a strong and engaging release slate, with a pipeline of theatrical successes becoming available for purchase on digital platforms, for many filling the gap left by the forced, temporary closure of cinemas. During the lockdown period blockbusters like Jumanji: The Next Level, Star Wars: The Rise Of Skywalker, 1917 and Frozen 2 were joined on digital platforms by family-friendly releases such as Sonic The Hedgehog and Onward, as well as critically lauded films like Knives Out and Jojo Rabbit, with average volume sales for digital purchase rising from more than 350,000 units per week in the 12 weeks from the start of 2020 to more than 565,000 units a week in the 12 weeks from March 28. Additionally, a limited selection of titles responded to the closure of the cinema estate by releasing to digital platforms earlier than planned, with benefactors of this strategy including Bloodshot and Birds Of Prey alongside the aforementioned Sonic The Hedgehog and Onward.

While the average selling price for a digital copy has risen year-on-year by 4.4 per cent to £8.51, the fact that the ASP has fallen marginally against its pre-lockdown position suggests that audiences are also engaging with the value proposition offered by the breadth and depth of catalogue content available through digital retailers alongside the pick of titles fresh from the cinema. The diverse range of older titles that digital customers have sought out during the pandemic includes classics such as Forrest Gump, Top Gun, Grease, Apocalypse Now and titles from the Harry Potter franchise, with titles released pre 2010 representing 38 per cent of all digital sales during lockdown.

Liz Bales, Chief Executive at BASE, said: “With nearly two million new customers[3] buying or renting entertainment content from a digital store during the lockdown period and contributing to the wider transactional video market returning to growth, the digital transactional market has been a beneficiary of the fact that the government’s Stay Home policy provided the right environment for it to flourish. With new release and catalogue content available instantly and without subscription, digital content has been able to play an important role for many in providing some much-needed light relief from the reality of lockdown.

“The fact that more than half of consumers anticipate they will maintain habits formed during lockdown[4], such as engaging more broadly with digital delivery, underlines the need for the video category to optimise around the opportunity delivered by the growth it has seen. Historically, home entertainment has proved robust in times of economic crisis and the addition of a meaningful number of new customers to digital transactional, alongside the resilience of the disc market, means the video category at large has plenty to build upon even as consumer confidence and discretionary spend potentially become challenged as we look to the future.”

While OCC provides a view of owned digital and physical media, Kantar offers a more holistic view of the digital market including Video On Demand (VOD) or rental transactions. Craig Armer, Strategic Insight Director at Kantar, says: “Across both digital purchase and rental, numbers have boomed during the lockdown period, with new and existing customers contributing to some 7.9 million transactions, up more than 22 per cent on the same period last year and more than the same period in 2018, which supports the story of the transactional video category returning to growth.” He added: “The number of transactional VOD customers has actually doubled to the point that VOD accounted for more than 28 per cent of the transactional video market in lockdown versus around 13 per cent for the same time last year. Across the digital video landscape the overall number of digital customers renting or purchasing is now at a record 5.5 million. While digital spend is growing across all age groups, it’s worth noting that VOD appeals to younger shoppers and digital purchase resonating more strongly with an older demographic perhaps more used to curating a collection.” 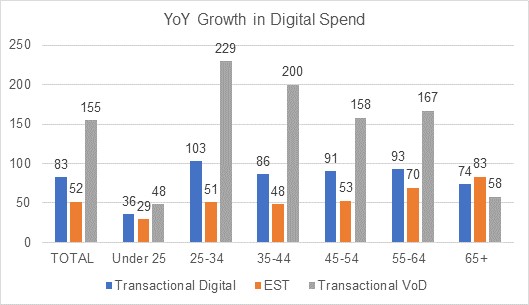 One area of innovation driven by lockdown and the response to the cinema estate being closed was the debut of so-called Premium VOD (PVOD) offerings, with titles earmarked for theatrical release appearing on VOD services early. Titles released in this model included Trolls World Tour, The Invisible Man, Emma, The Hunt and Military Wives, with PVOD offerings accounting for 6.2 per cent of all digital rentals over the lockdown period according to data from Kantar. Due to the higher price point of these premium offerings, that figure translates to a 19 per cent share of rental spend in the period, with Kantar estimating that more than half a million customers experimented with the new release format. In keeping with the PVOD success of Trolls World Tour, families have the largest share of spend and are accessing content through their TVs rather than through other devices, endorsing the popularity of the movie night in that continues to be a key occasion for transaction and, in lockdown, a welcome break from the situation the nation was dealing with.

[3] ‘New customers’ are defined as not having transacted in the last two years.

All official chart data must be attributed to © Official Charts Company

About the British Association for Screen Entertainment

The British Association for Screen Entertainment (BASE), previously known as the British Video Association (BVA), has a proud heritage representing the interests of publishers and rights-owners of pre-recorded filmed entertainment for the past 40 years. In a world of evolving technology and fluid consumer behaviour, the primary objective of the British Association for Screen Entertainment is to champion the growth of screen entertainment across disc and digital, while maintaining a business environment with the fewest regulatory burdens. Our members already represent the vast majority this £2.6 billion video market alongside Affiliate and Associate members from a host of critical industry stakeholders. We welcome new members from across the audio-visual ecosystem, from smaller independents to established players, through to service providers, broadcast platforms and more, offering flexibility through tiered levels of membership to suit different needs. For more information visit www.baseorg.uk

Kantar is the world’s leading evidence-based insights and consulting company. We have a complete, unique and rounded understanding of how people think, feel and act; globally and locally in over 90 markets. By combining the deep expertise of our people, our data resources and benchmarks, our innovative analytics and technology, we help our clients understand people and inspire growth.