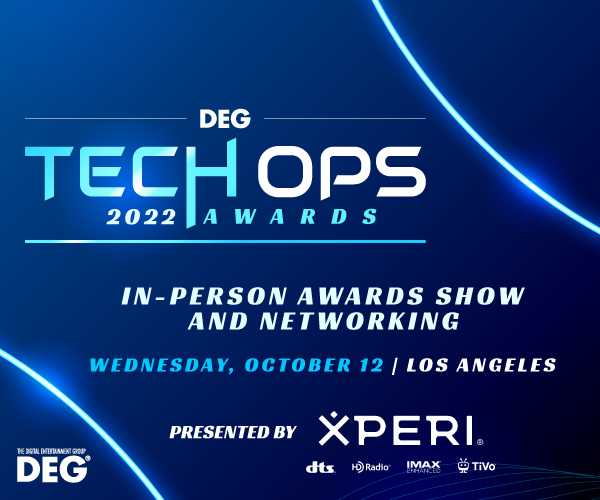 Doors Open at 5:45 PM
Awards Presentation Begins Promptly at 6:15 PM on the DTS Sound Space Main Stage
Networking Reception to Immediately Follow
Be sure to have your phone ready to vote for the People’s Choice Award, which will be announced during the reception.
DEG IS PROUD TO ANNOUNCE THE NOMINEES
FOR THE SECOND ANNUAL
TECHNOLOGY & OPERATIONS AWARDS
Generously Sponsored by

The award honors an individual or team that has demonstrated leadership, implementing something technically that had an impact on the business. Recipients will have demonstrated leadership and significantly contributed to a recent project or other engagement within the last two years in the technology & operations function. The award could be given to a company, individual, or team and can be from any business category.

This award honors cross-industry teams (representing two or more companies) who demonstrate excellence in collaboration, communication, and technical execution with an impact on operational efficiencies in order to achieve a common goal. The award could be given to teams from any business categories.

The award honors a team that identified a problem and created a novel solution. The solution would not necessarily have to be implemented at the time the award is given. There may be one award for each of the business categories with up to three awards total.

This award honors an individual who demonstrates an attitude of excellence, helps others, encourages teamwork, leads by example, and goes “above and beyond” the expectations of their job/duties to meet the needs of the industry while executing solutions to everyday challenges. There may be one award for each of the business categories with up to three awards total.

Technology Achievement Award honors adoption/leadership/engagement in the technology & operations function. Recipients will have demonstrated a technical achievement and significantly contributed to the realization of technological advancements. There may be one award for each of the business categories with up to three awards total.

This award honors trailblazing companies, teams, or individuals who exemplify excellence in overseeing quality, localized content under tight deadlines using creative and operational groundbreaking strategies. The award could be given to a company, individual, or team and can be from any business category.

This award honors and recognizes an individual or team that has demonstrated consistent results in technology leadership, technology achievement, or technology innovation.

To determine the award winners, DEG has enlisted a distinguished judging panel comprised of a cross-section of leaders representing entertainment technology. Among other factors, the judging panel will base its decision on the candidates’ contribution to a key goal or priority within the technology and operations function.