Jim Wuthrich to Stay on as DEG Chair Emeritus 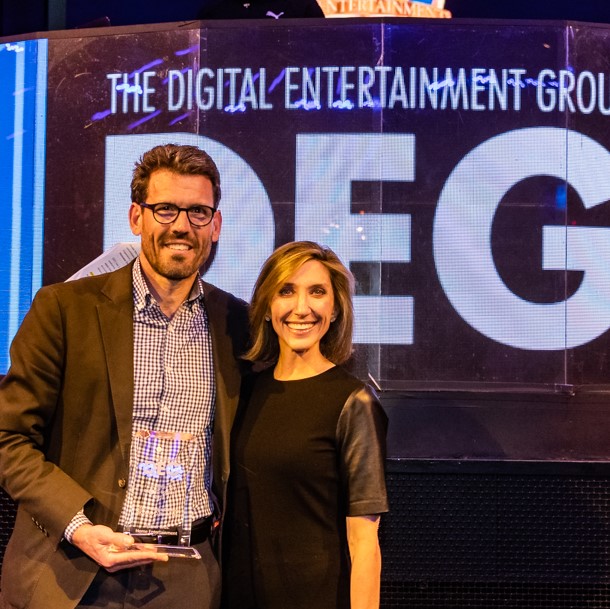 20 Dec Jim Wuthrich to Stay on as DEG Chair Emeritus

Wuthrich accepting a DEG award at CES in 2019, with DEG President and CEO Amy Jo Smith.

December 19, 2022 | DEG is pleased to announce that Jim Wuthrich will stay on as part of DEG leadership following his resignation from Warner Bros. Discovery at the end of the year. Wuthrich, who is leaving his position as President Content Licensing at WBD, has been with the studio 24 years. He was elected to the DEG Board of Directors in 2018 and served two years as Board Secretary and two years as Board Chair before becoming Chair Emeritus this year. “I’m grateful that Jim will continue to share his experience and leadership with DEG as he moves to the next chapter in his career,” said DEG President & CEO Amy Jo Smith. “He has helped chart a strong and steady course for our organization in these challenging times, and has been one of our most enthusiastic supporters.”

Jim: I was excited for you personally to see the news, but very concerned for myself! The only reason I was OK with you moving to Chair Emeritus status at the DEG was because I was SURE you would be way too busy to point out my many shortcomings as the new DEG board lead! Please enjoy some well-deserved time off – travel, have fun, whatever you wish, but then please find something to keep yourself too busy to monitor my work here! It’s bad enough we have Matt Strauss looking over our shoulders already. Congrats again!

Jim has had as much influence on digital home entertainment as anyone in Hollywood. I’ve personally learned a lot from him and am grateful to also be able to call him a friend. Jim, many thanks for your ability to lead and influence, and thank you for doing it every day with class.

The most important thing to know about Jim is that he is a (fellow) cheesehead from Wisconsin, which is clearly what makes him so fabulous! We met through DEG and I’ve had the privilege of serving with Jim and benefiting from his leadership, commitment to DEG, Warner, his team and colleagues, and most especially, his wit. I look forward to seeing what he does next – which will most certainly include a long bike ride!

Jim is the consummate professional and colleague. It has been a privilege to serve alongside him on the DEG and MA Boards. I am a little concerned that I finally made it to the DEG Board and now Jim is stepping back. I’m going to hope those things are unrelated! All kidding aside, Jim’s day-to-day leadership will be sorely missed, however I know that his next chapter will be an amazing one.

Jim’s departure leaves a big hole to fill. As a valued industry captain, he has been an exceptional champion of change for our category – a bold leader, strong competitor and more personally, a friend, whose pioneering influence leaves a lasting imprint in home entertainment. As he transitions to his next chapter, I look forward to seeing where his vision and passion take him next.

“Ironically, “Wüthrich” is an unflattering German nickname for a tyrannical person, but unless he’s hidden it really well from the industry, this description couldn’t be further from the truth for our Jim. Home Entertainment is a much better place thanks to Jim’s leadership, partnership, and friendship…over a shipful of years.”

Thank you, Jim for the leadership, partnership, and, most importantly, the friendship. Although, as friends, shouldn’t I have gotten better deal terms? You have been a powerful yet calm voice for both WB and the entire home entertainment industry; I look forward seeing your continued success on your next adventure!

To my friend and colleague whose contributions to the entertainment industry are too numerous to count, and not to mention a KICK#$&% triathlete, looking forward to watching your professional next big “race!!”

Jim and Steph are good friends and I can’t wait to see what comes next. I hope Jim will take a bit of a breather before jumping to the next opportunity… A “breather” for him will likely involve a double Iron Man competition on the south face of Everest or something equally insane! I wish him nothing but the best, he deserves it.

Jim is a change agent. This was obvious when he developed the studio’s B-to-B e-commerce website in the ‘90’s and has continued to be evident through the various incarnations of digital video distribution that he was responsible for shepherding. His leadership of WHE through multiple organizational changes is further evidence of his special talents and personality. Jim, you are a front-runner. I am confident that whatever door you decide to enter, or enterprise that you decide to start, you will always be a champion. Your generosity and
far-sightedness will continue to assure you continued success.