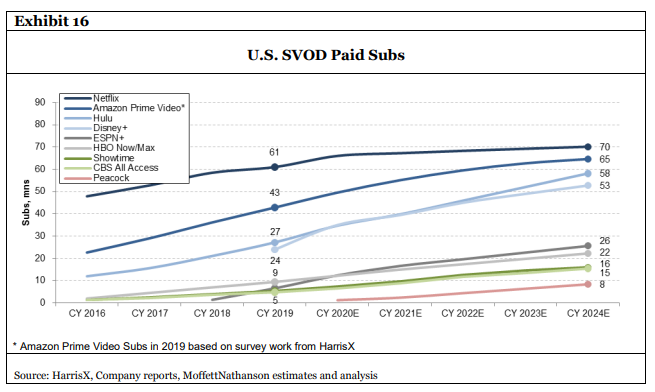 June 17, 2020 | Investment analysts Craig Moffett and Michael Nathanson of MoffettNathanson in a new research note explain why their current forecast paints a deflationary picture in video consumer spending going forward from the COVID-19 pandemic, and what that could mean for sectors including theatrical releases, transactional home entertainment and subscription streaming.The analysts write:

While the ultimate economic impact from COVID-19 remains uncertain, one thing we do believe is that this crisis will accelerate shifts in the media landscape. With cord cutting quickening and streaming rising, we wanted to dig deeper into how changes in consumer behavior will affect aggregate spending on video entertainment. What’s the runway for streaming growth if consumers continue to cut the cord, and where else might consumers shift their budgets?

With cord-cutting set to accelerate, we anticipate a meaningful uptake in streaming services beyond just industry-leading Netflix over the next several years. As Netflix has likely reached the flattening part of its S-curve in the U.S., with around 61 million domestic subs in 2019, we anticipate they will add +9 million more domestic subs by 2024.

However, we expect stronger growth from other streaming platforms such as Hulu, Disney+, ESPN+ and HBO Max. Indeed, we expect Disney+ will reach 53 million domestic subs by 2024, around 75% of Netflix’s U.S. subscriber base (see chart). We also expect to see Disney put more emphasis on growing Hulu in the next few years, including recently adding FX content to the service to expand its content slate. Note our 2019 Amazon Prime Video subs estimate comes from survey work we conducted with HarrisX showing Prime Video accounts for 48% of streaming households, with aggregate streaming penetration at 72% of total occupied households (see MN Quarterly SVOD Tracker: The Perfect Storm, April 17, 2020).

As consumers turn to SVOD services, we do not anticipate meaningful price increases going forward as the landscape remains competitive with several new entrants trying to grab market share. We believe Netflix will have the strongest pricing power, with average domestic monthly rates rising by +$4 to $17 in 2024, driven by the depth of Netflix’s content library and its leading market position. In contrast, we anticipate relative stable pricing from the other streaming platforms. In time, they will also need to increase pricing to find a path towards profitability, but we do not believe this will be a near-term focus as they scale up their subscriber bases.

Fueled by rising SVOD subs, we anticipate U.S. consumer spending on subscription streaming will increase by around +$22 billion to $38 billion by 2024, more than double the $16 billion spent in 2019. Note to get this industry SVOD total spending, we aggregate revenue estimates for each SVOD service. While industry growth is in part fueled by bundling/promotions with wireless deals, such as Disney+ offered for free to Verizon customers for 12 months, these SVOD services are still getting paid by the wireless carriers. So, while some wireless customers may not be paying directly for SVOD, they are implicitly paying for it through their wireless bill. Accordingly, we look to SVOD revenues as a way to size the market for consumer spending (explicit and implicit) for these services.

Nevertheless, we do believe the increasing tendency towards cross-subsidization of other businesses with video is creating deflationary pressure on aggregate consumer spending. Video is, in other words, being used as a loss leader, whether to sell wireless subscriptions or a year of membership to Amazon Prime. It can certainly be argued that in some economic sense, even when the service is given away “free,” and where there is no wholesale payer, customers are still paying for the value of video, albeit only indirectly so.

Craig Moffett and Michael Nathanson are Founding Partners at MoffettNathanson, which since its formation in 2013 has been considered a standard-bearer in Media and Communications research. This was excerpted from their June 11, 2020 research note, “U.S. Video Consumer Spend: The Great Deflation Debate.”