June 4, 2019 | Investment analysts Craig Moffett and Michael Nathanson of MoffettNathanson examine WarnerMedia’s direct-to-consumer plans in a May 29 report informed by a recent interview they conducted with WarnerMedia CEO John Stankey.

The pair size up the competitive situation for WarnerMedia as promising, but not without challenges:
AT&T, like Disney, will have to forgo high margin licensing revenue (and vital free cash flow) that is on the books today. And to the extent that any new DTC SVOD service will only accelerate the decline of traditional distribution, AT&T will suffer faster defections not only from DirecTV but also from the Turner Networks. Such is the dilemma for a company with positions in every corner of media and distribution.

Then they offer six takeaways from their conversation with Stankey, including an insightful analysis of how the WarnerMedia direct-to-consumer streamer might impact the company’s film windowing strategy: 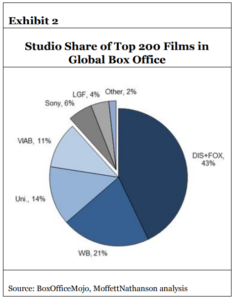 One question we have been asking over the past year is how will the new media owned SVOD services impact the existing film windows. Mr. Stankey believes that the WarnerMedia SVOD service could lead to a bigger slate at Warner Bros. but this might come with changes to the current output deals. If HBO loses the Fox movies in a couple of years to Disney+/Hulu, HBO would benefit from a more diversified Warner Bros. slate to further help with the SVOD service. But, with this broader slate, some movies that don’t work theatrically would work better on SVOD, e.g. romantic comedies. Mr. Stankey can envision having a quick theatrical release and then putting the movie after a few weeks on its SVOD service. Furthermore, if WarnerMedia adds a home exhibition window to its service, the upside for that movie becomes even more attractive. The real question here comes down to whether WarnerMedia will be able to convince exhibitors to get on board with these shortened theatrical windows. The pitch from WarnerMedia is that exhibitors will benefit from this box office upside as the studio would not have made the movie in the first place without the WarnerMedia SVOD window. This incremental box office would then grow the total pie for both exhibitors and studio while getting creative around the windows by increasing the inventory for them and better utilizing unused screens. Given the history of how the Premium Video On Demand (PVOD) conversations went over the past couple of years, we would be surprised if the theater owners cooperate willingly without much pushback.

Craig Moffett and Michael Nathanson are Founding Partners at MoffettNathanson, which since its formation in 2013 has been considered a standard-bearer in Media and Communications research. This was excerpted from their May 29 research note, “WarnerMedia: Raising the Curtain on Their DTC Plans.”