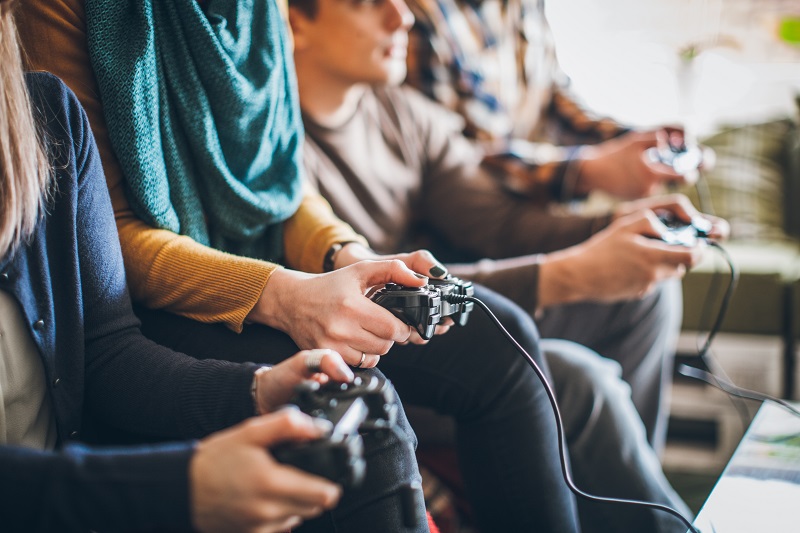 Posted at 06:31h in Blog by Marcy Magiera

July 30, 2018 |  Change is inevitable, and nowhere is that more so than in video games, where transformation can happen in the blink of an eye, thanks to the velocity inherent in digital media. For the ninth year in a row, Nielsen has conducted extensive research into how Americans feel about—and consume—gaming. According to the 2018 Nielsen Games 360 Report, the number of people playing games has continued to grow, with two-thirds of the U.S. population ages 13+ now considered gamers. The impact of new technologies being implemented through console upgrades and the rollout of new VR/AR devices are breathing new life into the current console cycle.

Mid-cycle console upgrades have continued this past year with the highly anticipated launch of Xbox One X, which added to the excitement that began with the release of PlayStation 4 Pro. Similar to PlayStation’s strategy with PlayStation 4 Pro, Xbox One X uses the same operating system as the base Xbox One/One S, but features hardware upgrades to increase performance. These new entrants have helped increase the overall share of time spent on gaming consoles this year at the expense of PC gaming and older 7th generation consoles. 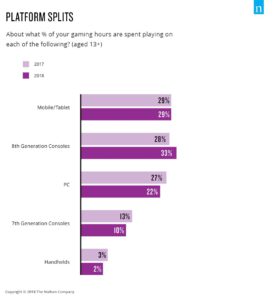 The mid-cycle upgrades have also inspired increased intent to purchase these consoles: 22 percent of gamers intend to buy an Xbox One X (up from 13 percent last year) or a PlayStation 4 Pro (stable vs. last year). 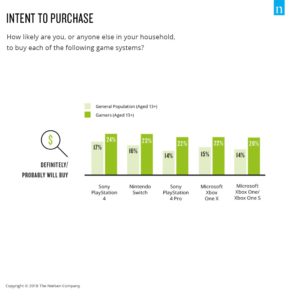 Not to be left out of the console conversation, Nintendo continues to attract players with its accessible Switch console, launched in March 2017, and its broadly appealing titles like Super Mario Odyssey and The Legend of Zelda: Breath of the Wild. Even with the strong year one performance, interest remains high, as 23 percent of gamers say they will “definitely” or “probably” buy a Nintendo Switch (up from 16 percent last year).

In addition to experiencing continued interest in the Switch console, Nintendo is also riding the wave of consumer interest in retro gaming, selling out of its two palm-sized microconsoles, the NES and the Super NES. These two classic consoles, which come preloaded with a lineup of greatest hits from the 8-bit and 16-bit era, appeal to both gamers and the general population alike. While it’s unclear how enduring the ardor for retro hardware will be, software is another matter. As today’s hits become tomorrow’s greatest hits, there’s likely to be steady demand for “classic” video games that can connect players on an emotional level with their youth.

Gaming’s place in the wider entertainment mix will continue to be closely monitored as VR/AR continues to emerge, esports gathers momentum and the consumption of gaming-related content—who is viewing and how—evolves.