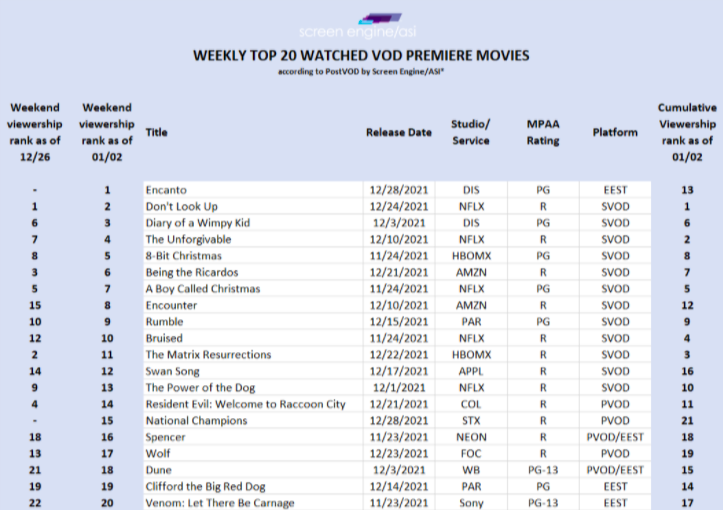 January 3, 2022 | This week on the SEA Top 20 VOD Premiere Movies (video on demand) list, Early EST title, Disney’s Encanto, beat the rest and premiered at No. 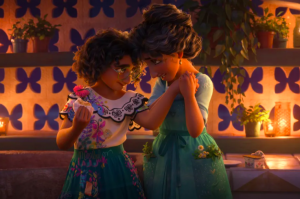 1. Another premiere movie, STX Entertainment’s National Champions (PVOD), debuted softly at No. 15. Netflix’s Don’t Look Up shifted down to No. 2, while Disney’s Diary of a Wimpy Kid, Netflix’s The Unforgivable, and HBO Max’s 8-Bit Christmas all moved up three spots to No. 3, No. 4, and No.5, respectively. Amazon’s Being the Ricardos dropped slightly to No. 6 on its second week, while an earlier Amazon title, Encounter, climbed several spots to No. 8. The remaining second-week titles saw various dips this week: HBO Max’s The Matrix Resurrections dropped nine places to No. 11, Sony’s Resident Evil: Welcome to Raccoon City (PVOD) dropped 10 places to No. 14, and Focus Features’ Wolf (PVOD) moved down four places to No. 17.

For top cumulative streaming viewership, Don’t Look Up (No. 1) outran The Unforgivable (No. 2) after two week’s streaming, and The Matrix Resurrections rounded out to be No. 3.