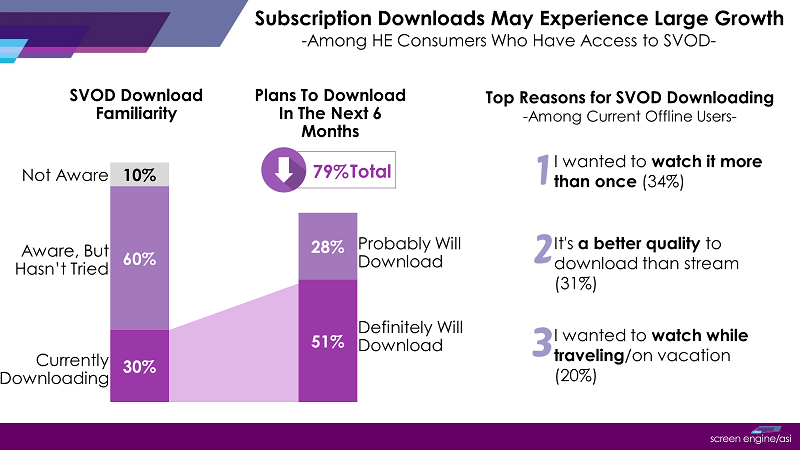 Netflix launched its streaming service just over 10 years ago, forever changing the way we watch movies and TV shows at home. The sheer volume of movies and TV shows offered on subscription streaming services, coupled with the all-you-can-eat model and low monthly fee are taking up valuable viewership time that might otherwise be spent on transactional home entertainment. To counter this, studios and retailers are focusing on new release titles and ownership advantages such as permanence, sharing capabilities, and special features.

When Amazon Prime announced offline viewing, with Netflix following suit almost six months ago, it appeared that subscription streaming services aimed to take over our mobile devices as well as our connected TVs. With downloads (once only available on purchases or rentals), consumers can truly watch whenever, wherever without an internet connection.

Based on recent research conducted by Screen Engine, we’ve discovered that nine in 10 consumers who are currently subscription streaming are aware of subscription service downloads, yet only three in 10 active sub streamers have watched this way. While the current number of people using their subscription service to download content is small, almost eight in 10 say they intend to use this feature in the next six months, making it important to understand why viewers are downloading shows, how and when they’re watching them, and what impact this may have on transactional home entertainment.

Key reasons for downloading content include wanting to re-watch (34%) and better viewing quality (31%). As offline viewing means not having to be tied to Wi-Fi, I see it as being most useful while traveling, or as a parent, having my kids’ favorite movies or TV shows available to watch at all time. To this, downloading content for their kids to watch is the top reason among parents for offline viewing (40%).

Notably, re-watching is often the key reason for buying a film or TV program – with subscription services providing this offering, one must ask the extent to which subscription downloads have the potential to cannibalize home entertainment transactions. The ability to download and re-watch is blurring the lines between subscription streaming and premium content. If Netflix and other streaming services keep adding features traditionally offered only via transactions, and with new releases being added to these services more quickly and in greater quantities, as well as their focus on providing must-see original programming, the lines will continue to be blurred between the advantage of buying a movie and just watching on SVOD. “Could offering special features on Netflix be next?”

Most SVOD downloaders report that they are generally buying or renting about the same number of movies as they did prior to having access to subscription downloads. However, when questioned specifically about the last offline program they downloaded, over half say they would have paid a transaction purchase or rental fee to watch it if it hadn’t been available to download through a subscription service. So, although they haven’t yet changed their overall attitudes about buying and renting due to SVOD downloading, their most recent activity indicates it will have an impact.  Notably, parents are even more likely to say they would have transacted, suggesting sales of family films may be the first to show a significant impact from subscription downloads.

Netflix and other streaming services have already disrupted the way households watch TV.  As more consumers utilize offline functionality, effectively providing the same viewing experience as digital transactions, studios will need to be mindful of how to further differentiate the home entertainment content they offer to buy or rent – whether it’s through windows, special features, or other extras. Offline viewing may not have an immediate effect on EST and other transactions, but if studios continue to provide new release content and download features to subscription streaming services, there will likely be less room for transactional home entertainment. 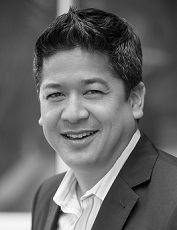