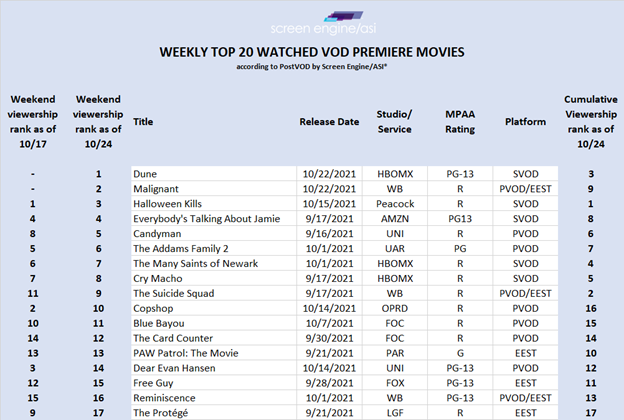 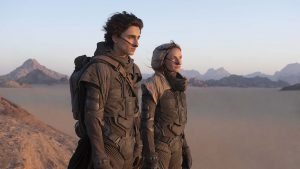 classic 1965 novel of the same name, topped the list with strong viewership (No. 1). Warner Bros.’ Malignant (entering the PVOD/EEST window) came in at No. 2, ahead of a second week title Universal’s Halloween Kills (streaming on Peacock) at No. 3. Amazon’s Everybody’s Talking About Jamie sat at No. 4, while another Universal title Candyman (PVOD) moved up to No. 5. On their second week, Open Road Film’s Copshop (PVOD) and Universal’s Dear Evan Hansen (PVOD) both dropped on the list—Copshop from No. 2 to No. 10, and Dear Evan Hansen from No. 3 to No. 14. Lionsgate’s The Protégé (EEST) also moved down to No. 17.

For top cumulative streaming viewership, Universal’s Halloween Kills took over the top spot (No. 1) after two weeks’ streaming, ahead of Warner Bros.’ The Suicide Squad (PVOD/EEST) at No. 2, and HBO Max’s Dune at No. 3.