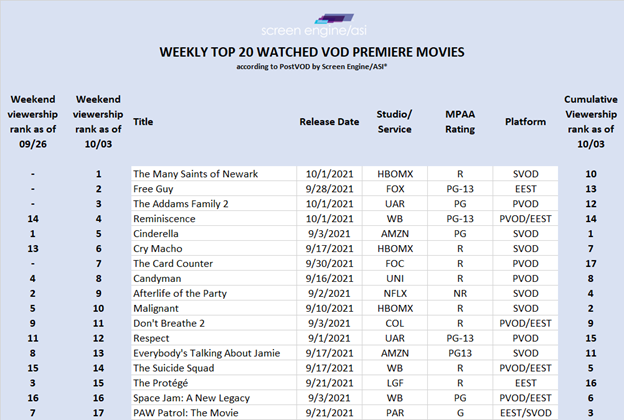 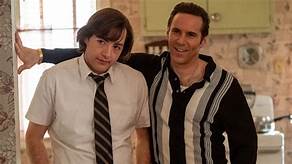 Soprano’s early years) came in at No. 1 over the weekend’s streaming on HBO Max. The box office hit Free Guy (EEST), from 20th Century Studios, premiered at No. 2 following its theatrical win. United Artists Releasing’s animated comedy The Addams Family 2 (PVOD) debuted at No. 3. Warner Bros.’ Reminiscence, shifting to a second window (PVOD/EEST) over the weekend, climbed up to No. 4. Another premiere title from Focus Features, The Card Counter (PVOD), came in at No. 7. The previous top performer, Amazon’s Cinderella, dropped a few spots to No. 5 with new releases coming in. Also dropped on the list are Netflix’s Afterlife of the Party from No. 2 to No. 9, and Lionsgate’s The Protégé (EEST) from No. 3 to No. 15. Meanwhile, HBO Max’s Cry Macho climbed to No. 6 after two weeks’ streaming.

For top cumulative streaming viewership, the No. 1 spot is still held firmly by Amazon’s Cinderella. HBO Max’s Malignant moved up one place to No. 2, switching positions with Paramount’s PAW Patrol: The Movie (EEST/SVOD) which now stood at No. 3.