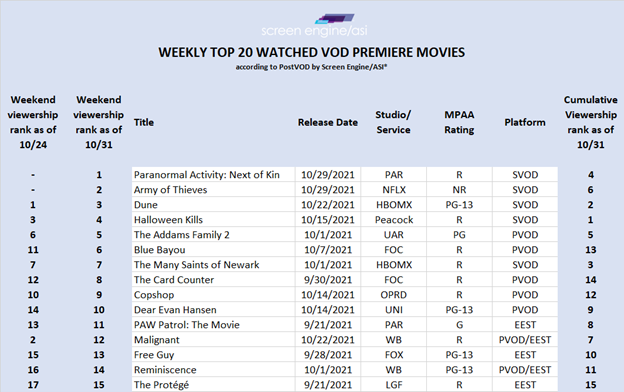 November 1, 2021 | This week on the SEA Top 20 VOD Premiere Movies (video on demand) list, Paramount’s Paranormal Activity: Next of Kin, a stand-alone sequel to the Paranormal 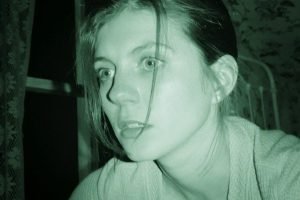 Activity series, debuted at No. 1 on Paramount+. Prequel to Army of the Dead, Netflix’s Army of Thieves premiered at No. 2. On its second week, Warner Bros.’ Dune, streamed on HBO Max, stood at No. 3. Another Warner Bros.’ title Malignant (PVOD/EEST) witnessed the biggest movement this week, dropping ten places to No. 12. In the meantime, Focus Features PVOD titles, Blue Bayou climbed five places to No. 6, and The Card Counter climbed four places to No. 8.

For top cumulative streaming viewership, Universal’s Halloween Kills held the top spot (No. 1) with strong viewership after three weeks’ streaming on Peacock. HBO Max’s Dune moved to No. 2 with strong momentum. Also streamed on HBO Max, The Many Saints of Newark sat at No. 3.