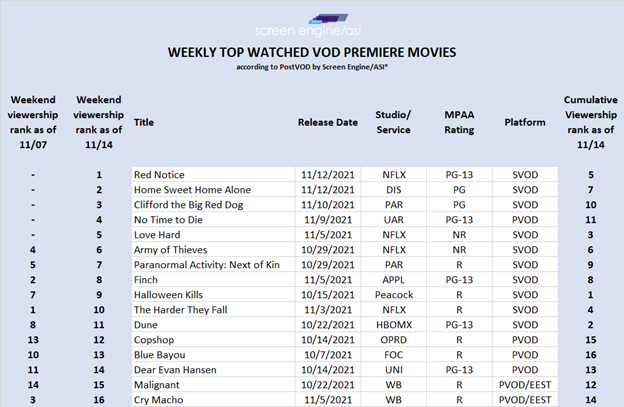 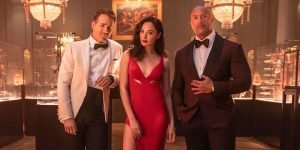 premiered at No. 2, signaling the upcoming Christmas season. Paramount’s new day-and-date release Clifford the Big Red Dog landed at No. 3. James Bond franchise, United Artists Releasing’s No Time to Die (PVOD) came in at No. 4 with solid viewership, being the top performer among PVOD/EEST titles. A week post-release, Netflix’s trending title Love Hard sat at No. 5. With new movies in, most previous titles moved down several spots, especially top three from last week: Finch on Apple TV+ dropped to No. 8 (from No. 2), Netflix’s The Harder They Fall fell to No. 10 (from No. 1), and Warner Bros.’ Cry Macho (PVOD/EEST) dropped to No. 16 (from No. 3).

For top cumulative streaming viewership, Universal’s Halloween Kills on Peacock and Warner Bros.’ Dune on HBO Max held the No. 1 and No. 2 spots, respectively. Netflix’s Love Hard followed closely at No. 3.