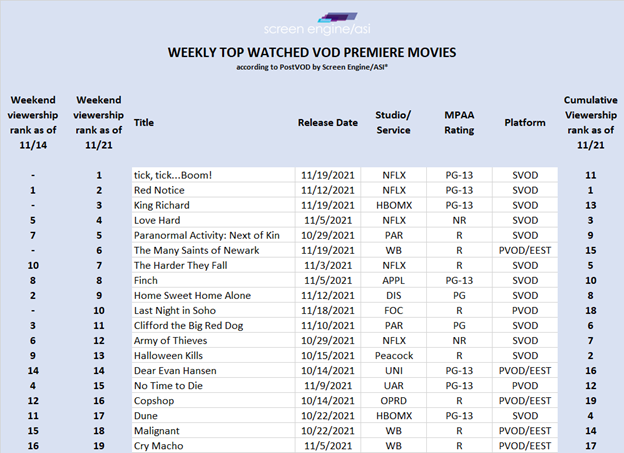 November 22, 2021 | This week on the SEA Top VOD Premiere Movies (video on demand) list, Netflix’s biographical musical tick, tick…Boom! came in at No. 1, ahead of trending title Red

Notice (No. 2). Warner Bros.’ latest day-and-date release on HBO Max, King Richard, arrived on the list at No. 3. Also trending on Netflix, Love Hard moved up one spot to No. 4. Entering the PVOD/EEST release window, Warner Bros.’ The Many Saints of Newark premiered at No. 6. Another premiere title Focus Features’ Last Night in Soho (PVOD) landed softly at No. 10. Except for Red Notice, titles on week two saw big dips: previously standing at Nos. 2 to No. 4, Disney’s Home Sweet Home Alone dropped to No. 9, Paramount’s Clifford the Big Red Dog moved down to No. 11, and James Bond movie United Artists Releasing’s No Time to Die (PVOD) fell to No. 15.


For top cumulative streaming viewership, Netflix’s Red Notice won the No. 1 spot with less than two weeks’ streaming, replacing Universal’s Halloween Kills streamed on Peacock, which now rounded out at No. 2. Same as last week, Netflix’s Love Hard stood at No. 3.


*Screen Engine/ASI’s Weekly Top Watched VOD Premiere Movies list is based on the incidence of respondents from the syndicated weekly PostVODTM online survey where they state which movies they viewed and how recently from a list of recently released VOD movies, in the past six weeks, including PVOD (Premium Video-On-Demand), EEST (Early Electronic Sell Thru), or SVOD (Subscription Video-On-Demand).