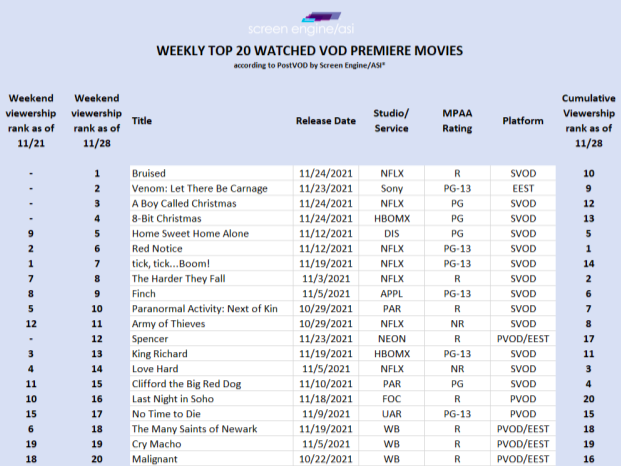 featuring Marvel character Venom: Let There Be Carnage (EEST) came in at No. 2. As Christmas season begins, three Christmas movies followed at the frontier spots on the list: Netflix’s A Boy Called Christmas premiered at No. 3; streaming exclusively on HBO Max, 8-Bit Christmas premiered at No. 4; an earlier title, Disney’s Home Sweet Home Alone moved up to No. 5. Another debut title Neon’s Spencer (PVOD/EEST) entered the list with soft performance, standing at No. 12. With new debut titles and holiday films gaining more attention, most previous movies shifted down several spots. Netflix’s Red Notice fell to No. 6, tick, tick…Boom! fell from the top to No. 7, and Warner Bros.’ simultaneous release King Richard dropped from the third to No. 13.

For top cumulative streaming viewership, Netflix titles took up the top three spots: Red Notice maintained its advantage at No. 1 with competitive viewership, The Harder They Fall followed at No. 2, Love Hard rounded out at No. 3.