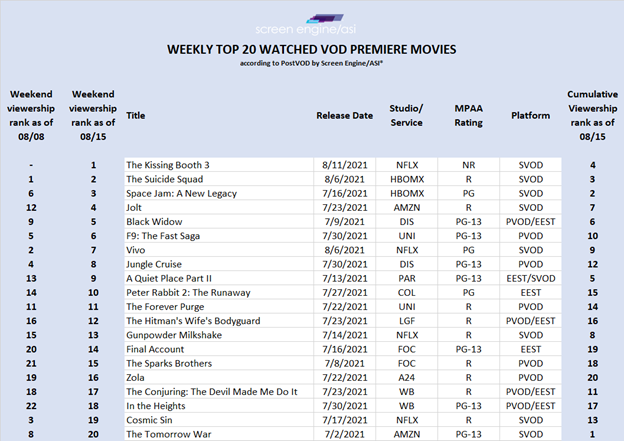 August 16, 2021 | This week on the SEA Top 20 VOD Premiere Movies (video on demand) list, the young adult franchise’s final installment The Kissing Booth 3 on Netflix debuted at No. 1. Available in theatres, Warner Bros’ The Suicide Squad (No. 2) and Space Jam: A New Legacy (No. 3) on HBO Max retained their appeal to home entertainment audiences. Amazon’s Jolt saw a big 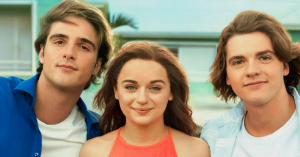 uptick of 8 places to the No. 4 spot. Disney’s Black Widow moved up 4 places to No. 5, becoming the top PVOD/EEST title on the Top 20 VOD Premiere Movies list this week. The next PVOD title, Universal’s F9: The Fast Saga, stood at No. 6. With other titles moving up to the top, Vivo on Netflix shifted down from No. 2 to No. 7 in its second week. From the No. 4 spot and onward, this week’s titles shared a similar viewership.

The top cumulative streaming movies, looking like the previous week, were Amazon’s The Tomorrow War and HBO Max’s Space Jam: A New Legacy at No. 1 and No. 2, respectively. Taking over the No. 3 spot was HBO Max’s The Suicide Squad. The only new release, The Kissing Booth 3 on Netflix, premiered with a fourth place in cumulative viewership.