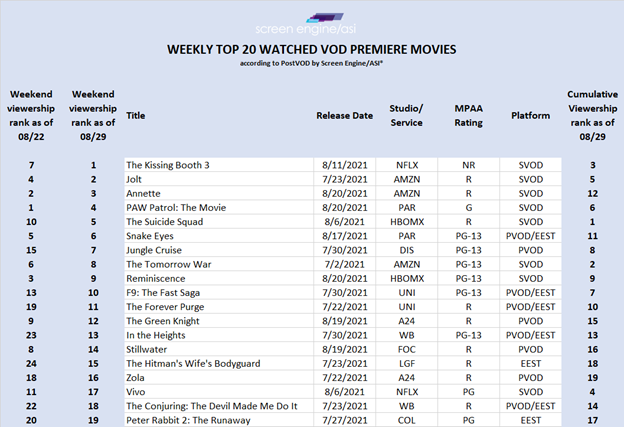 August 30, 2021 | This week on the SEA Top 20 VOD Premiere Movies (video on demand) list, Netflix’s The Kissing Booth 3 rose to the top (up 6 places to No. 1) again on its third week. Amazon’s Jolt and Annette stood at No. 2 and No. 3, respectively. Last week’s top viewed movies, Paramount’s PAW Patrol: The Movie shifted down from No. 1 to No. 4, and Warner Bros’ day-and-date release Reminiscence on HBO Max dropped from No. 3 to No. 9. Meanwhile another title on HBO Max, The Suicide Squad, moved up 5 places to No. 5. Paramount’s Snake Eyes became the most viewed PVOD/EEST title this week at the No. 6 spot. Other big movements include that Disney’s Jungle Cruise (PVOD) climbed 8 places to No. 7, Universal’s The Forever Purge (PVOD/EEST) went up 8 places to No. 11, and Lionsgate’s The Hitman’s Wife’s Bodyguard re-entered the list at No. 15.

The top cumulative streaming movies were HBO Max’s The Suicide Squad (now at No. 1) and Amazon’s The Tomorrow War (No. 2), both were close in viewership. Netflix’s The Kissing Booth 3 gained more viewers and now stands at No. 3.