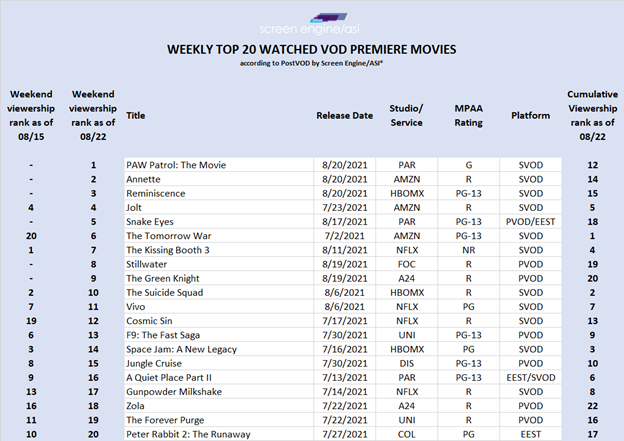 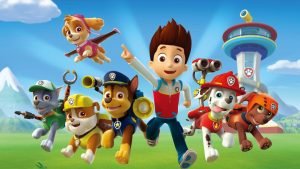 Movie with a day-n-date release in theaters won the No. 1 spot, Amazon’s musical drama Annette debuted at No. 2, and Warner Bros’ Sci-Fi mystery Reminiscence on HBO Max (also day-n-date release with theatrical) came in at No. 3. Amazon’s Jolt (SVOD) remained at No. 4 from last week. In terms of new PVOD/EEST titles, Paramount’s Snake Eyes (PVOD/EEST) debuted at No. 5; two other PVOD new releases, Universal’s Stillwater and A24’s The Green Knight premiered at No. 8 and No. 9, respectively. With six premieres standing higher on the list, most of the previous titles shifted around noticeably. Amazon’s The Tomorrow War climbed 14 places to No. 6, while the previous top three saw major downward movements: Netflix’s The Kissing Booth 3 moved down to No. 7, HBO Max’s The Suicide Squad to No. 10 and Space Jam: A New Legacy to No. 14.

The top cumulative streaming movies, no major change against last week, were Amazon’s The Tomorrow War maintaining the No. 1 spot easily, and HBO Max’s The Suicide Squad (No. 2) and Space Jam: A New Legacy (No. 3). Netflix’s The Kissing Booth 3 stood at No. 4.