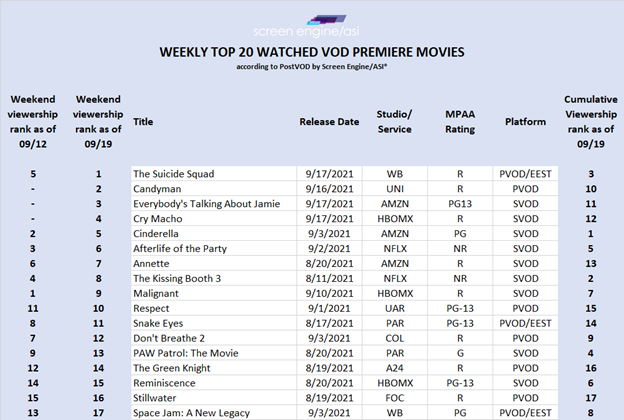 September 20, 2021 | This week on the SEA Top 20 VOD Premiere Movies (video on demand) list, Warner Bros.’ The Suicide Squad, shifting to a second window (PVOD/EEST), premiered at No. 1 with strong viewership, ahead of the rest of the premiere titles, which were all close in viewership. Universal’s Candyman (PVOD) debuted at No. 2 (released in theaters about 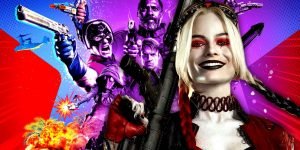 four weeks ago); Amazon’s new biographical musical comedy Everybody’s Talking About Jamie came in at No. 3; and Warner Bros.’ day-and-date release Cry Macho premiered on HBO Max at No. 4. With new titles stepping in, most previous titles moved back slightly. Amazon’s Cinderella shifted down three spots to No. 5, Netflix’s Afterlife of the Party was also down three places to No. 6. The biggest movement this week was witnessed on HBO Max’s day-and-date release Malignant, previously the top streamed title, now dropped to No. 9.

For top cumulative streaming viewership, Amazon’s Cinderella led the pack at No. 1 after three weeks’ streaming. Netflix’s The Kissing Booth 3 moved up to No. 2, and HBO Max’s The Suicide Squad stood at No. 3 (just after its weekend’s debut).