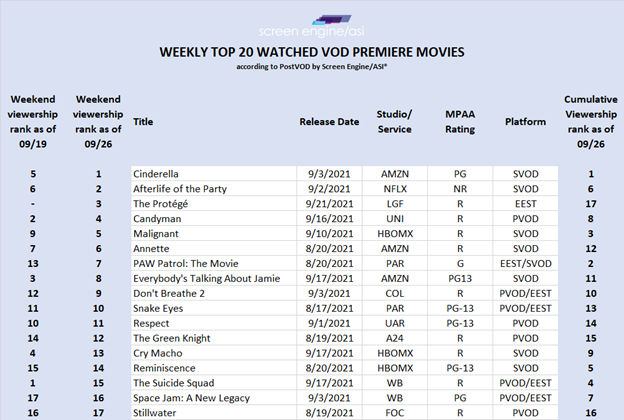 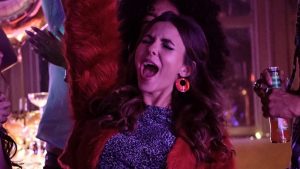 No. 1 spot again, and Netflix’s Afterlife of the Party (pictured r.) moved up to No. 2 for the first time. Lionsgate’s The Protégé (EEST) debuted at No. 3. Paramount’s PAW Patrol: The Movie, streaming on Paramount+ and debuting on its second window (EEST), climbed six places to No. 7. Meanwhile, last week’s new releases all dropped a few or more spots. Universal’s Candyman (PVOD) dropped slightly, now sitting at No. 4; Amazon’s Everybody’s Talking About Jamie shifted down to No. 8; Warner Bros.’ day-and-date release on HBO Max, Cry Macho, pulled back to No. 13, and another HBO Max title ,The Suicide Squad (PVOD/EEST), dropped from the top to No. 15.

For top cumulative streaming viewership, Amazon’s Cinderella held the top spot (No. 1) firmly. Paramount’s PAW Patrol: The Movie stood at No. 2 with a solid performance, ahead of HBO Max’s Malignant (No. 3) and The Suicide Squad (No. 4).