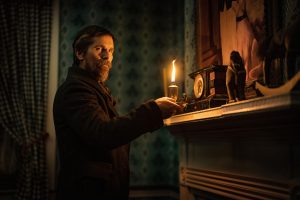 January 9, 2023 | This past weekend on the SEA Top VOD Premiere Movies (video on demand) list, Netflix’s mystery thriller film The Pale Blue Eye (SVOD) debuted in the top spot overall (No. 1). Universal’s biographical drama film She Said (PVOD/EEST/SVOD) moved up several spots to No. 2. Netflix’s mystery film Glass Onion: A Knives Out Mystery (SVOD) shifted down one spot to No. 3. The American biographical war film Devotion (produced by Sony, released by Paramount) (EEST/SVOD) debuted at No. 4. Warner Bros.’ superhero film Black Adam (SVOD) moved up a couple spots to No. 5.

For cumulative streaming views this past week, Netflix’s Glass Onion: A Knives Out Mystery (SVOD) maintained viewership in the top spot (No. 1), Warner Bros.’ Black Adam (SVOD) maintained its spot at No. 2, and Netflix’s Roald Dahl’s Matilda the Musical (SVOD) was in at No. 3.