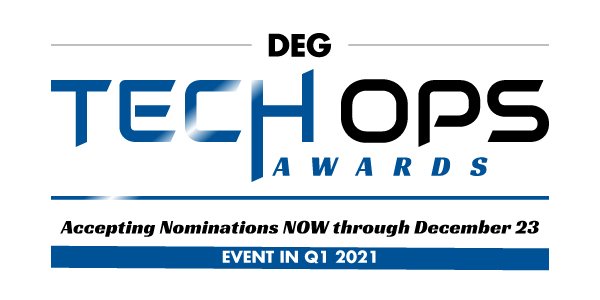 Posted at 07:58h in DEG News by Shannon Gregory

LOS ANGELES (December 2, 2020) – DEG: The Digital Entertainment Group is pleased to announce the first Technology & Operations Awards, to be presented virtually in the first quarter of 2021. DEG’s TechOps Awards event will recognize exceptional technology accomplishments in the digital supply chain achieved by both companies and individuals. The Awards will also encourage and promote excellence in all business categories represented within DEG and showcase the importance of the industry’s technology & operations teams supporting the digital supply chain.

“We are delighted to have the opportunity to honor such talented men and woman in entertainment technology,” said Lena Wasikowski, VP, Global Client Relations, WarnerMedia and Chair, DEG Technology and Operations Committee. “We feel that these awards are a way to celebrate and honor those who are leading the way in innovation and implementation within the industry, and to showcase the need for continued support within entertainment organizations of these very important roles and functions.”

There will be three main award categories: Technology Leadership, Technology Achievement, and Technology Innovation. In 2021, there will also be a Lifetime Achievement Award that spans categories and business segments. Nominations are now open and must be received by DEG on or before December 23, 2020.

DEG will also recognize those companies and individuals that did not win but who participants believe are deserving of recognition with live voting for a “People’s Choice Award.”

“Technology Leadership Award”: This award honors a company, individual, or team that has demonstrated leadership, implementing something technically that had an impact on the business. Recipients will have significantly contributed to a recent project or other engagement in the digital supply chain within the last two years. The award could be given to a company, individual or team and can be from any business category.

“Technology Achievement Award”: This award honors adoption/leadership/engagement since the inception of DEG’s Technology & Operations Committee. Recipients will have significantly contributed to the committee’s goal of the realization of technological advancements. There may be one award for each of the business categories with up to three awards total.

“Technology Innovation Award”: The award honors a team that identified a problem and created a novel solution. The solution would not necessarily have to be implemented at the time the award is given. There may be one award for each of the business categories with up to three awards total.

“Lifetime Achievement Award”: This award honors and recognizes an individual or team that has demonstrated consistent results in technology leadership, technology achievement or technology innovation.

To determine the award winners, the DEG has enlisted a distinguished judging panel comprised of a cross-section of leaders representing entertainment technology. Among other factors, the judging panel will base its decision on the candidates’ contribution to a key goal or priority within the digital supply chain and .

For more information and the nomination forms, please contact Bekah Sturm at Bekah@degonline.org.