TV Makers to Hollywood: Motion Smoothing Is a Consumer Choice 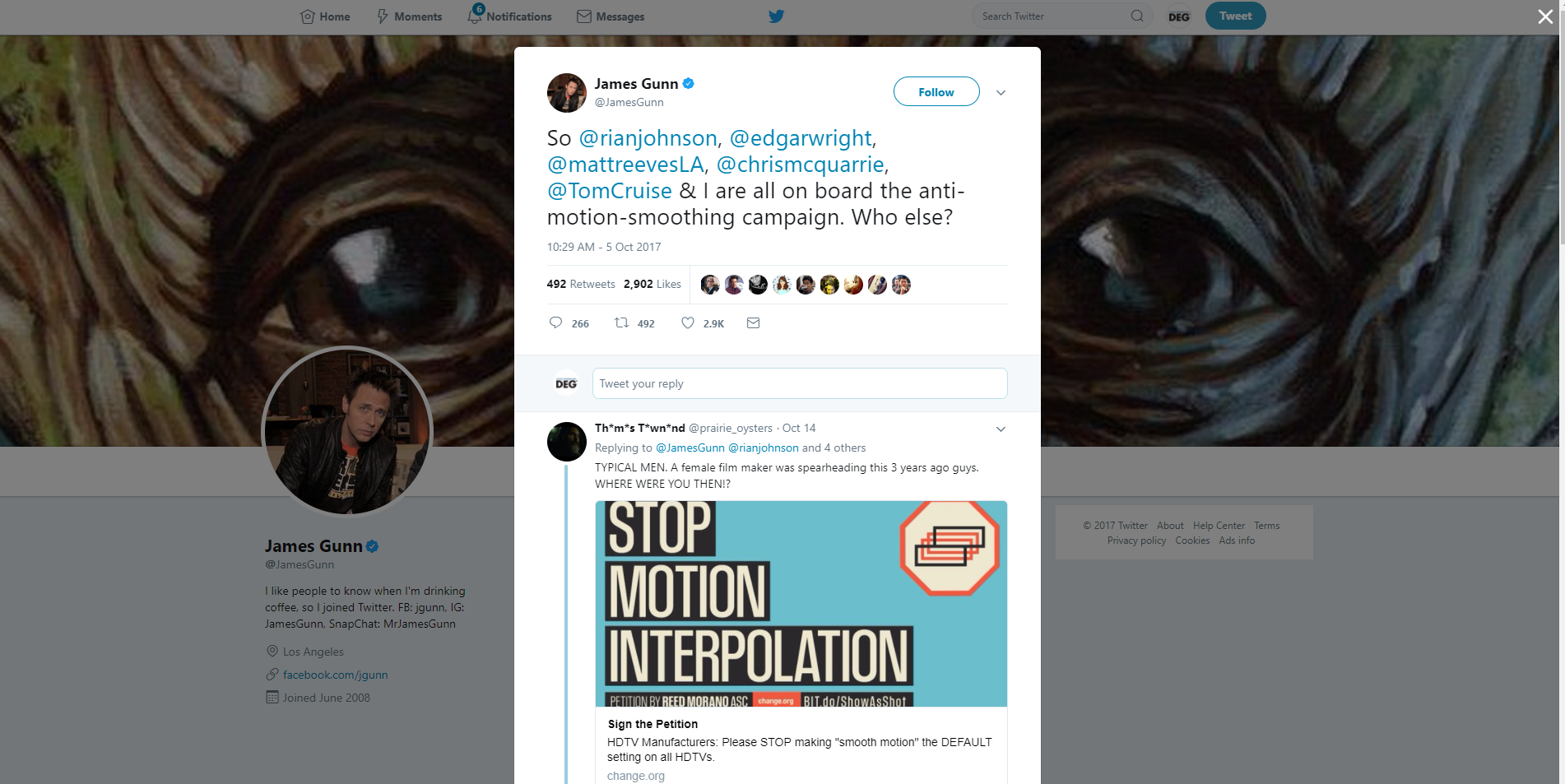 Posted at 16:55h in Blog by Shannon Gregory
Share

By Greg Tarr
Special to DEG

A Twitter conversation started last month by Guardians of the Galaxy Vol. 2 director James Gunn and other prominent Hollywood content creators demanding all new television sets have their motion-smoothing settings turned off by default continues to be a hot potato with TV makers.

Representatives from some of the leading television brands including Samsung, Vizio, Sony, and LG either declined to comment at all or issued terse explanations of their decisions to keep motion-smoothing factory settings activated in their televisions to accommodate broader use-case needs of customers.

Gunn sent out a Tweet in early October stating: “So @rianjohnson, @edgarwright, @mattreevesLA, @chrismcquarrie, @TomCruise & I are all on board the anti-motion-smoothing campaign.”

The Twitter handles belong to some of the hottest directors, producers and stars in Hollywood today, including the creators of: The Last Jedi, Baby Driver, War of the Planet of the Apes, and latest Mission Impossible installment.

The protest is not new. Gunn’s recent social media crusade picked up the baton of director/cinematographer Reed Morano (Meadowland, Frozen River) and a few others who began circulating a petition to television manufacturers six years earlier in the hope of helping TV viewers avoid a condition known as the “Soap Opera Effect” when watching theatrical-intended content.

This is an artifact that becomes visible in many LCD and OLED-based televisions when their so-called “motion-smoothing” video processing systems are engaged. When turned up too high this circuity can make 24 fps film or video content look overly sharp to the point that it resembles live video rather than content shot on silver halide film.

The soap opera effect became more noticeable with brighter and more detailed 4K Ultra HD LCD and OLED displays, but the effect has been present even in some HD and Full HD plasma displays going back to the start of flat-panel technologies. The condition will present itself in almost every consumer television today, although some brands and models have circuitry that handles the artifact better than others.

When extreme, the effect has been known to make some viewers dizzy or nauseous.

Although motion-smoothing systems can be easily turned off in the picture settings menu of most of today’s televisions, the content producers have become irritated, in part, because consumer use-studies have shown that most TV purchasers never adjust the factory picture settings of their devices, and therefore miss out on the filmmakers’ true artistic intent.

TV makers turn on motion-smoothing settings by default to improve the look of some of the most popularly watched video-based programs, including: sports, movies and live or taped situation comedies.

However, it can make the latest blockbuster movies look like what director Rian Johnson (Looper and Brick) called “liquid diarrhea.” Johnson wrote in his Twitter response to Gunn that “motion smoothing should be a choice and not a hoop everyone has to jump through to unmake.”

Professional calibrator and display development consultant Kevin Miller (ISFTV) told DEG Digital Entertainment News that he strongly agrees with Gunn’s position, adding that “while it does preserve motion resolution and can be beneficial with digitally shot content at 30 or 60 fps, it does look horrible with 24 fps content.”

Miller recommends that manufacturers and consumers turn off default motion-smoothing “at the very least in a TV’s most accurate picture mode which would be `Movie’ for Samsung and `Cinemapro’ for Sony flat panels. I don’t know if it’s realistic to expect manufacturers to defeat it in all picture modes as a factory default, but I would applaud any manufacturer that would.”

Among those manufacturers who would comment on the issue, most prefer to leave the choice to change the settings up to the customer. The world’s television market share leader said:

“Samsung strives to provide the best entertainment experience to all of our customers while delivering the most realistic picture quality just as content creators intended. As individual viewing preferences may vary, we offer our customer the choice to adjust, or completely disable any motion smoothing performed by the TV,” a company spokesman told us.

Similarly, Sony issued a statement saying: “While some directors don’t like excessive motion interpolation because of the `soap opera effect,’ they need to consider that the average consumer watches a lot more than just 24 (fps) movies. Other content, like sports greatly benefit from `smooth motion.’ The default setting for Sony MotionFlow is designed to provide the best compromise between cinematic motion for movies and smooth motion for live action.”

Until something more automatic comes along – like the ability to let content producers adjust TV settings through Extend Display Identification Data (EDID) or similar mechanisms — it would seem true movie lovers will have to get better acquainted with their televisions’ picture settings controls.