Posted at 19:34h in Blog by Marcy Magiera
Share

This is an excerpt of the TV Time report ‘The Quest of Quibi – Is Short-Form Streaming Ready for Prime Time?’ Get the full report here.

April 6, 2020 | With mobile video consumption exploding, Whip Media Group set out to explore if the market is ready for a new paid streaming service that can capitalize on the popularity of short-form video content. While YouTube has hit over 2 billion users and rising social media platform TikTok has more than 500 million active users, both are free and not packaged or marketed as a streaming service. Others have tried to offer a more professionally packaged service and not succeeded, most notably Verizon Go90.

Quibi will enter the market with a much different approach than its predecessors and current short-form rivals. First, the service will prioritize the smartphone as the primary viewing experience, with content optimized for that device. Second, it will showcase talent-centric content which will include “movies in chapters” (longer, scripted stories broken into chapters that are between seven and 10 minutes long), as well as unscripted shows, documentaries and daily hits of news/entertainment/inspiration. And finally, it will be packaged as a paid service with pricing based on ads/no ads subscription tiers.

Based on Quibi’s strategy, age and lifestyle may play a role in both who finds the service attractive and their willingness to pay. Mobile usage and video consumption trend higher among younger consumers. These factors are likely to influence the degree of interest for this first-of-its-kind streaming platform across Generation Z (22 and under), Millennials (23-38) and Generation X (39-54).

Consumers currently subscribe to an average of four paid streaming services and indicate they are likely to subscribe to one additional paid service in the coming year, according to the results of 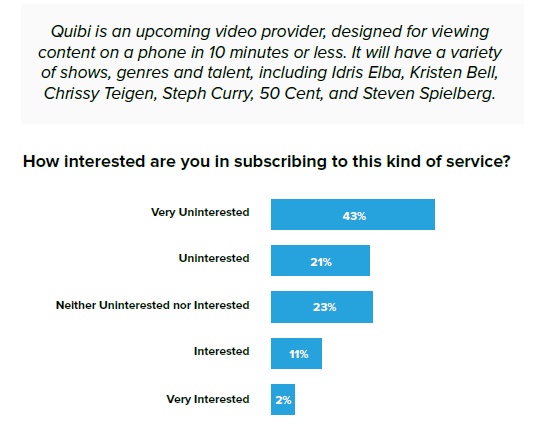 the study. This suggests that, while there is still room for growth, it is a crowded market and people are approaching their maximum number of streaming subscriptions.

Awareness plays a critical role in the decision-making process of selecting a new service.

In this study, nearly one-quarter (24 percent) of respondents indicated they had heard of Quibi. While this was understandably lower than the other more prominent forthcoming services, it was up from 5 percent in a similar survey TV Time fielded in September of 2019. Clearly awareness of Quibi is beginning to emerge.

Beyond awareness, the study revealed that consumer intent to subscribe to these three services varied substantially. Likely/Very Likely to subscribe ranged from a high of 24 percent for HBO Max, an established brand with premium content, to a low of 3 percent for Quibi.

Later in the survey, participants were provided with a description of the Quibi service, including the short-form format, mobile viewing experience, key talent involved, and variety of content.
They were then asked again how interested they would be in subscribing to that type of service

After providing the Quibi service description, the results were dramatic. The level of Interested/Very Interested to subscribe to Quibi jumped to 13 percent. Once participants knew what the service was about, they were four times more likely to subscribe (recall, the unaided level of interest was only 3 percent). Additionally, the percent who said they were Very Uninterested declined substantially from 60 percent before the service was described to 43 percent after. This could imply that as the industry attention builds leading up to the launch and beyond, and clarity around the value of the Quibi service is better understood, the platform could expect to see high growth. 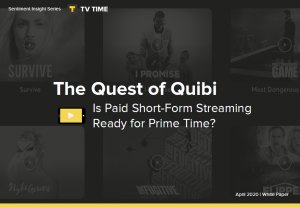 In addition to measuring intent to subscribe, it is important to examine aspects of the innovative service that could be drivers of interest. Since Quibi is a first-of-its-kind streaming platform, it is worth understanding the degree to which factors such as the unique mobile-viewing experience might influence adoption of the service, especially from a Generational perspective.

When people were asked what might motivate them to sign up for the new streaming service, among Total Respondents and perhaps not surprisingly, the top response was Genuine Curiosity (26 percent. Beyond that, Variety of Content (23 percent) and Talent (23 percent) were the most often cited factors. Clearly the content and talent on the platform will be a critical component to its success.