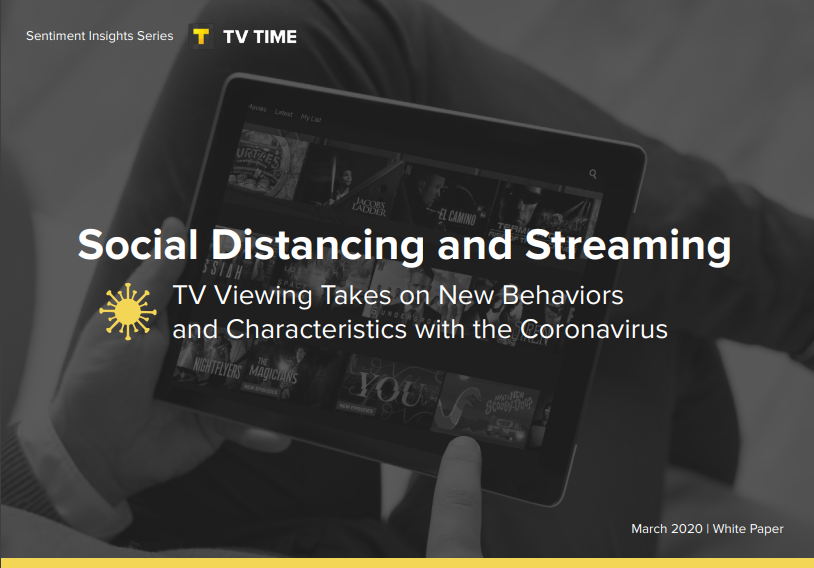 Posted at 18:18h in Blog by Marcy Magiera
Share

Adapting to this rapidly changing environment requires the ability to quickly understand why viewers are engaging in content, beyond just traditional viewership metrics, and to interpret and adjust to those patterns in real-time.

March 20, 2020 | The impact of the coronavirus has spread to every state and continent around the world (Antarctica is the only region spared thus far). Outbreaks are accelerating in major cities and metropolitan areas across the US and the collective population is being directed to avoid crowds, cancel events, stay at home and work remotely to reduce the risk of contracting the disease or infecting others. As they adjust to this new life of isolation and social distancing, people are staying inside, hunkering down and turning to television. While early indicators are that TV viewership is up, today’s situation is beyond what we’ve come to think about as binge watching. It’s not voluntary or by choice. It’s an extended period of content engagement to pass the time as consumers wait out the crisis.

As the entire country vacillates between worried and bored, anxious and reconciled, TV Time, a Whip Media Company, conducted a US-based study in March 2020. The study leverages TV Time’s global community of more than 13 million connected users of its TV tracking platform. Our goal was to assess how consumers are feeling during this volatile time of self-isolation and examine not just what they’re watching, but why they’re watching. With the entertainment industry spending on content at an unprecedented pace, it’s critical that streaming service providers better understand their consumers and offer the right content choices that are right for their platform.

We have an unprecedented opportunity to measure changes in viewing behavior and content engagement that has been brought about in a highly accelerated manner by COVID-19. According to our recent study, 71% of respondents are planning to socially distance/isolate themselves to some degree and the vast majority (84%) are intending to increase their TV consumption during this period. What is the trending mood and emotional sentiment now that many viewers are social distancing? This is just one example of the types of insights captured by our study.

During the time that this survey was fielded, the vast majority (71%) of respondents said they were planning to socially distance/isolate to some degree, with another 20% considering it. Only 9% stated they are not. 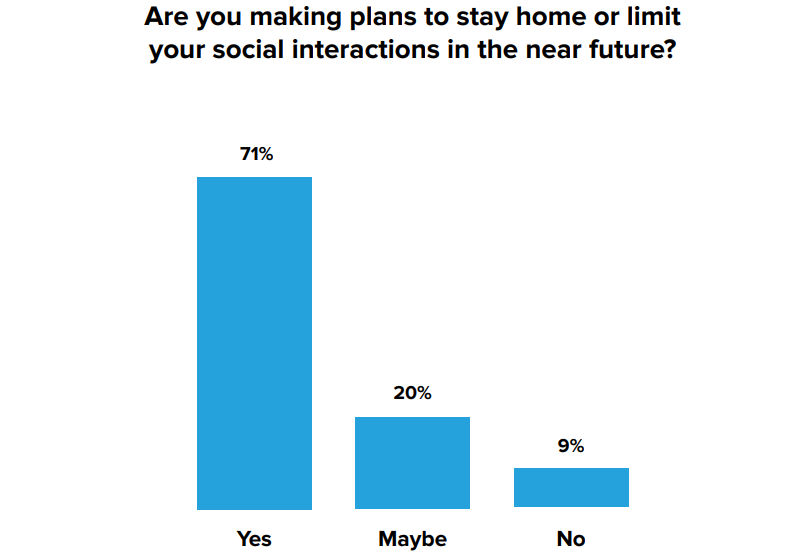 One bright spot for the consumer is that they will have an ever-expanding choice of treaming services. In the last 3 months, we’ve seen new offerings from industry leaders such as Disney+ and Apple TV+ and coming soon, the launch of NBC Universal’s Peacock, Quibi and HBO MAX.

With the convergence of these two key factors — the coronavirus-driven intent to increase consumption and more streaming content and services available — TV viewership has the potential to exceed levels never seen before.

When asked what types of shows respondents were planning to watch during this time period, the most popular choices were Dramas (78%) and Comedies (76%), followed by SciFi/Fantasy at 67%. It appears that viewers are looking for some combination of lighter entertainment and escapism from today’s ominous headlines. A notable group of viewers (25%) also said they are interested in Reality TV viewing.

Fewer than a fifth of respondents selected Children’s Programs, which could be due to the timing of when the survey was fielded. With widespread K-12 school closures now in effect, this percentage is likely to increase. While only 9% selected “Sports-Related” content as most likely to watch, this again may be due to the timing of the survey and not capturing the full impact of cancellation of live sports by the NCAA, NBA, MLB, NFL and others. Among those who selected “Other,” Anime emerged as a popular choice. 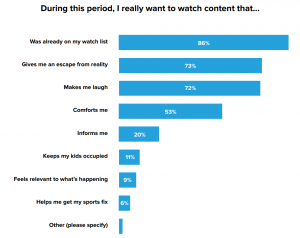 To tap into the mood or emotional sentiment among viewers, the survey asked what was motivating their viewing choices. A full 86% of respondents said they wanted to watch shows already on their watch list, implying that this period of viewership could be used to watch shows that people have been meaning to get around to. Other popular motivations were to give them an escape from reality (73%) and to make them laugh (72%), with comforting them at about half (53%).

Consumer sentiment will no doubt evolve in the coming weeks as more and more people are staying isolated in their homes. Streaming services are poised to be among the
biggest beneficiaries to capture consumers’ viewership and engagement. Disney+ already released Frozen 2 earlier than planned. And as the coronavirus takes its toll on
the theatrical business, national chains such as Regal and AMC have shut down, further driving consumers to in-home streaming entertainment. In addition, content providers such
as NBCUniversal have announced that they will make their movies available on-demand on the same date as their global theatrical releases. This could be the beginning of a largescale shift in home viewing to give consumers faster access to box office hits in a post-coronavirus age.

What other announcements will follow to captivate sports enthusiasts who can no longer watch live events? Or remote workers who want content in the background while checking periodic news updates? And Gen Z and younger audiences who need entertainment with school closures?

Clearly the coronavirus era is fueling different types of viewing habits and new content release strategies to satisfy an ever more connected consumer. It will also be interesting to see how services such as Quibi, which will come to market in April with a new concept of shortform content of no more than 10 minutes, perform in this environment. We may also see other strategies, such as content providers capitalizing on their libraries by bringing classics and Boomer-era popular programming to new audiences. In essence, using diverse and new content choices to attract consumers who may not normally be watching streaming TV.

Today’s “social distancing and streaming” dynamic is beyond what we’ve come to think about as binge watching. It’s redefining the viewing landscape. Adapting to this rapidly changing  environment requires the ability to quickly understand why viewers are engaging in content, beyond just traditional viewership metrics, and to interpret and adjust to those patterns in real-time.