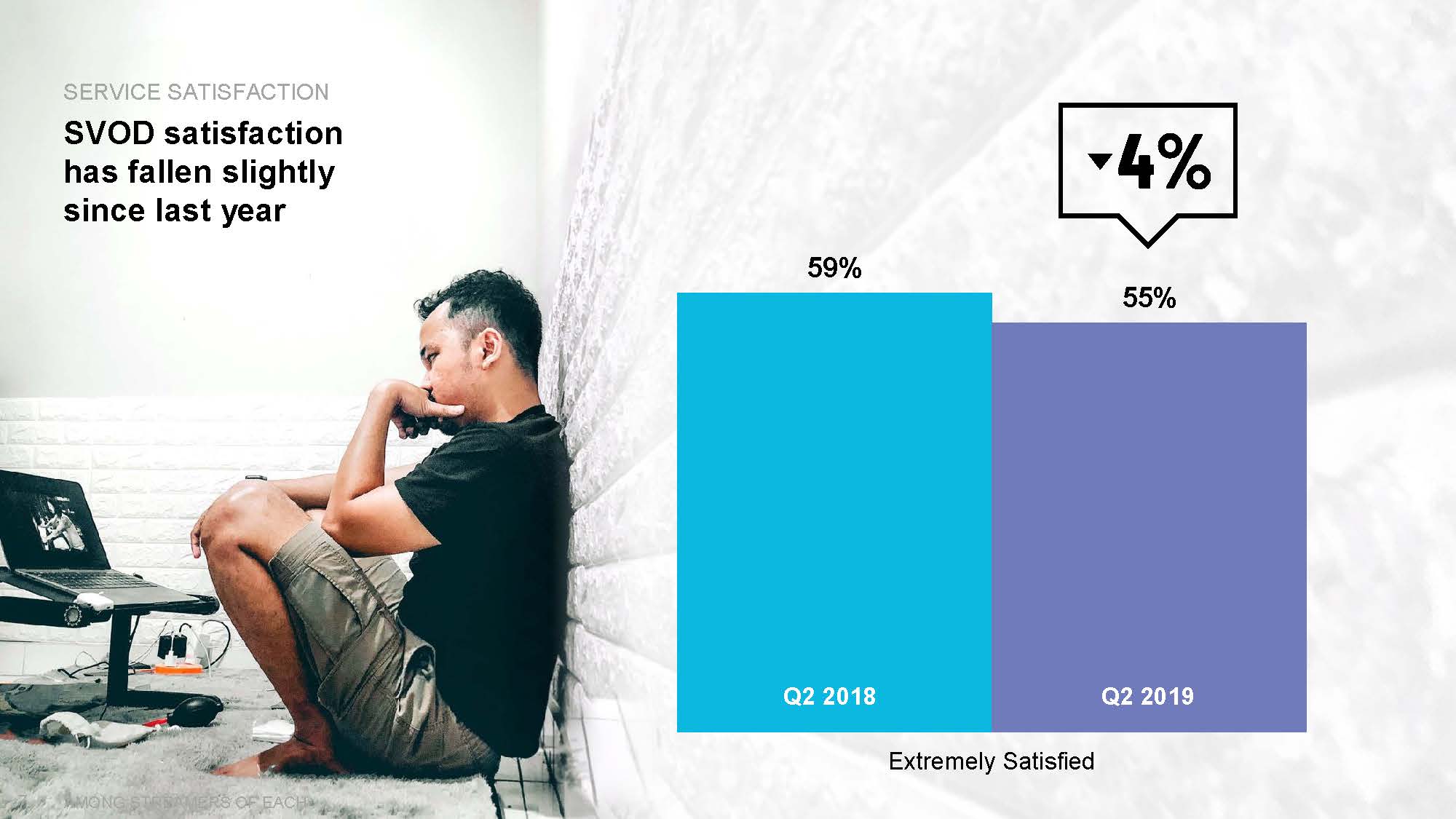 Posted at 08:05h in Blog by Marcy Magiera

Consumer viewing time is leveling off, but there is still interest in adding new services — with the right content

September 4, 2019 | There is little question that the proliferation of media and entertainment services and content available to consumers can be overwhelming if not mind-boggling. What started as a way of giving consumers more choice and control over their media consumption has quickly turned into a “how much is too much” situation, one that media companies need to pay special attention to as they launch even more subscription video on demand (SVOD) services. 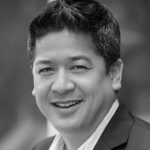 To help companies navigate these complex waters, Screen Engine/ASI conducts regular consumer studies to determine the best ways to reach and engage potential audiencess, as well as identify potential pain points and barriers. One such study is the quarterly Global Entertainment & Technology Tracker (GETT), an online survey of 1,500 entertainment consumers ages 13 to 64. The most recent waves found that consumers may have already reached peak media consumption, with the average respondent indicating they spend 27.5 hours/week watching movies, TV shows and other videos. This is identical to time spent a year-ago.

SVOD services accounted for around a fifth of that overall consumption (5.8 hours/week) and with more SVOD services about to launch, this number should logically increase. However, as more SVOD services become available and fragment the content even further, how will this impact consumer satisfaction with these pay services?

According to GETT, there is already a slight decline in top box satisfaction (“extremely satisfied”) with SVOD services, down four points from 59 percent a year ago to 55 percent. So, while more of these services become available, will consumers follow with more viewing? The answer may be “no” as only 24 percent of consumers said they would be watching “more” content on these services in the next three months (down from 31 percent saying that a year ago). 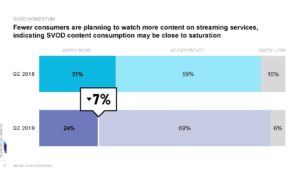 Furthermore, it appears that the idea of having so much choice may no longer be the selling point it once was as only 54 percent agree with the statement “I love having so many options of content to watch, and I watch as much as I can.”  This is down 10 points from a year ago. There may even be a growing backlash against this proliferation of choice, with nearly half of entertainment consumers (48 percent) agreeing that “There is so much content on subscription streaming services that I struggle to find something to watch.” One possible consequence of this frustration is consumers canceling or downgrading subscriptions they no longer find provide value for the money. 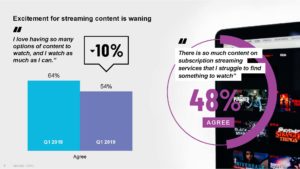 It is not all bad news, however, as there is still an appetite to try new SVOD services, with more than half (54 percent) of those who are likely to change their SVOD service saying they will be “adding a new service”.

In addition to Screen Engine / ASI’s tracking surveys, the company routinely conducts consumer focus groups around entertainment and technology. A recent group revealed that consumers are interested in a bundled SVOD approach, especially when it comes to billing and authentication.

Arguably, the service with the highest level of awareness and anticipation is Disney+ which is set to launch November 12. SE/ASI tracking shows Disney+ awareness leaping from 24 percent in the first quarter of 2019 to 35 percent in the second quarter of 2019. Disney+ has generally been perceived as family and kid focused, which could limit interest in subscribing as a standalone (for $6.99/month). However, the service recently announced a package by which consumers could pay $12.99/month and receive Disney+ and the more general entertainment focused Hulu as well as sports focused ESPN+. Could a return to bundling be the solution consumers are looking for? Perhaps so, as seen in recent focus groups, consumers are already doing that with services like Hulu and Spotify or adding on standalone services such as HBO to existing streaming services. 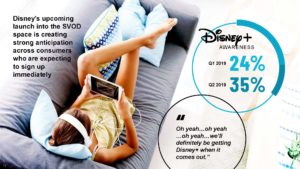 Further data from GETT shows that content is the top driver of SVOD interest and retention. Eighty-two percent of consumers cite “content,” as the reason they continue to subscribe to SVOD services with the statement “I can always find something to watch” as the highest single reason. Given the importance of content, it is not surprising that nearly two months ahead of its launch, Disney+ has already announced over a half dozen original series and movies available on day one, and well over a dozen more original titles coming in the first year. Not only is it important in this highly saturated market for new streaming services to build awareness of content, but also to ensure audiences know where to find it. According to data from SE/ASI’s Tracktion weekly survey of 4,000 media consumers, SVOD services do a much better job than traditional linear television networks at linking new content to their service after it premieres, but lag both broadcast and cable in the weeks before. Disney+ is clearly taking no chances, making sure to get a head start on both building awareness and branding for its offerings.

As Disney + and the new wave of big SVOD services prepare to launch, entertainment providers should be closely monitoring the streaming landscape to see if consumers will actually buy into all these new SVOD services, or if they will start to explore other options, such as emerging AVOD services, which are just beginning to ramp up their marketing efforts.