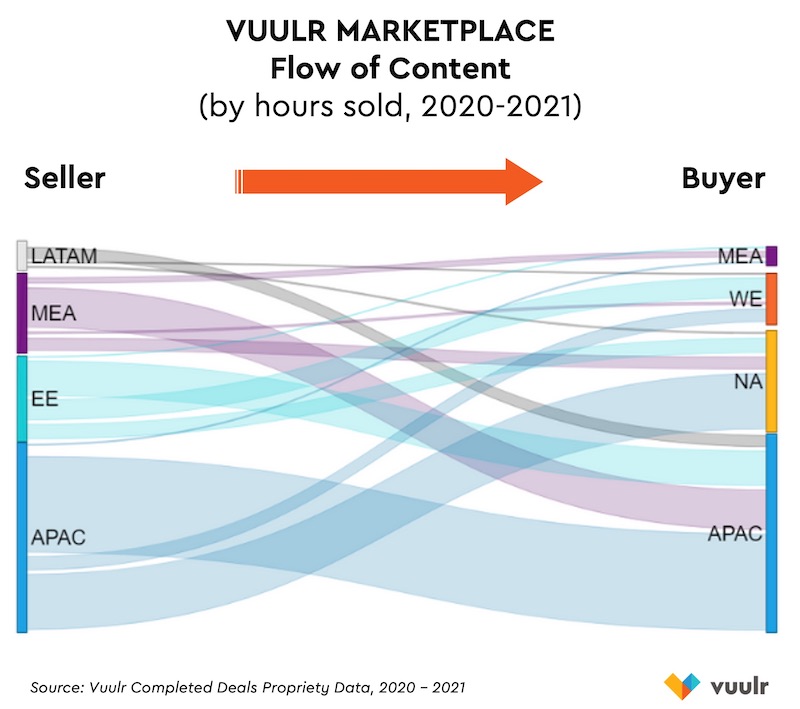 Posted at 17:00h in Blog by Marcy Magiera
Share

Above: Chart shows the outflow of content licensed from Latin America, Middle East and Africa, Eastern Europe and Asia Pacific and its destination territories.

May 16, 2022 |  In 2021, the digital transformation of the entertainment industry accelerated and broadened to satisfy the demand from audiences for more and more content from outside their home territories. A recent McKinsey study revealed that business-to-business (B2B) buying has moved online, with buyers enjoying the speed and flexibility it provides. In entertainment content sales, digital platforms such as Vuulr enable teams on both the buy side and the sell side to cover more territories, in parallel with their existing acquisition and distribution strategies. 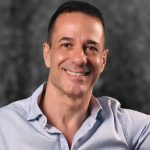 During the year, Vuulr saw strong growth in licensing activity from buyers across all regions, with 2x growth in the value transacted on the marketplace globally. Vuulr has enabled transactions with buyers from 53 countries, ranging from major markets such as the U.S., Canada, France, Italy, Germany, Spain, U.K. and India, to smaller content markets including Argentina, Botswana, Mongolia and Vietnam.

The following report of market activity is based on acquisition trends that emerged from analysis of the 9,325 hours of content licensing deals completed on Vuulr in 2021, a growth of 159 percent year on year.

The U.S.  led the way in buying activity with 36 percent of total share, licensing a total of 3,500 hours of content. One third of content bought by U.S. buyers was sourced overseas, principally from Australia, the U.K. and the Netherlands. Some notable deals were by an American documentary streamer that picked up over 215 hours of factual content from companies in the U.K., Germany, Netherlands and Canada. 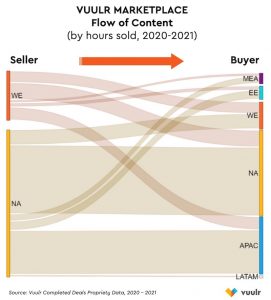 Chart shows the flow of content from Western Europe and North America to other territories.

On the sell-side, U.S sellers’ share of total hours sold on the platform remained dominant with 4,800 hours sold to buyers from all regions.

U.S. sellers also are seeing strong demand from U.S.-based buyers on Vuulr, including an American AVOD platform with a global audience acquiring more than 380 hours of content from a U.S seller.

Additionally, U.S sellers are also closing an increasing number of international deals with buyers in India, Cyprus, Bangladesh, Spain and even Mongolia.

Buyers in Asia Pacific, Europe, Africa and Middle East increased their acquisition activity on the marketplace strongly in 2021. Demand from APAC buyers made up 44 percent of the total content hours licensed, with India, Singapore, Mongolia and Australia featuring prominently.

APAC sourced its content hours from a wide range of overseas producers, from the U.S. and the U.K. to Nigeria and Colombia. As one example, an Indian direct-to-home service provider licensed 100 hours of one of the world’s most watched U.S.-produced daytime drama series.

Many acquisition deals were driven by streaming platforms looking to localize their program slates rapidly as they prepare to enter new regional markets. An Indian premium VOD service, for example, purchased 225 hours of Mandarin drama from a Hong Kong-based distributor to be dubbed into multiple Indian languages; and 69 hours of content from Nigeria.

About 10 percent of content hours bought by APAC buyers on the Vuulr platform have come from sellers in the Middle East and Africa (MEA). Content from Turkey and Nigeria are being picked up by buyers in Mongolia and India. In one such deal, a buyer from Mongolia licensed FTA and SVOD rights for a newly released 120-episode Turkish drama series.

In Europe, much of the growth in buying activity came from Spain, Italy and Germany. With streaming, geographical boundaries no longer pose a barrier and Spanish platforms are easily able to tap into audiences in Latin America that share similarities in language and culture. A Spanish SVOD focused on yoga and healthy living, with a footprint in Spain and Latin America, licensed 225 hours of wellness and lifestyle content from the U.S., U.K., Australia, Germany, Switzerland, Mexico, India and Czech Republic. Another Spanish OTT platform launching a thematic channel on classic cars licensed a 30-episode unscripted series from a U.S based sales agent, about a small garage in Las Vegas with a giant reputation in the Porsche community.