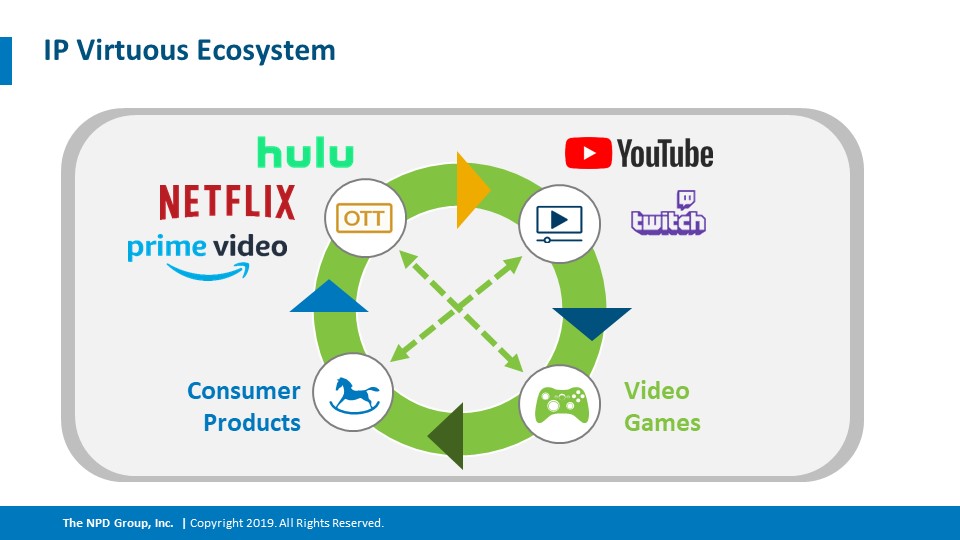 Posted at 08:00h in Blog by Marcy Magiera

(Above) Within content companies, consumer products and distribution groups now must be aligned, particularly around streaming windows.

Consumers have already democratized entertainment, defining it more broadly than ever before

April 1, 2019 | It’s not only Disney and Fox that are becoming one. Entertainment encompasses a broader definition than ever before. The original perspective that entertainment came from your television or at a movie theater is too limited for today’s consumers. Even if the entertainment industry insists on that definition, consumers have already democratized entertainment. Entertainment is your drone, your Twitch channel, your Peloton workout. It’s the robot that teaches your kids to code, it’s Tik-Tok and it’s YouTube. (Sorry, Hollywood). 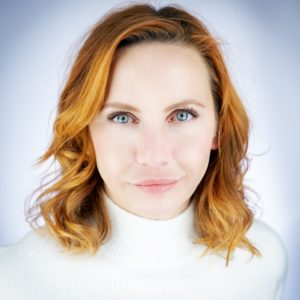 Studios and content creators have to redefine how intellectual property (IP) goes to market. For example, no longer can the Consumer Products group be uninformed about the licenses the Distribution group is negotiating with streaming platforms and when those licenses start. That is especially true when the goal is to get the most out of your marketing spending and maximize revenue. Some studios like Disney and Sony have already recognized this fact and have reorganized into vertical alignment for better control. Communication across departments is even more critical.

Here’s how coordination across all departments that touch the same IP is a necessity:

A major subscription video-on-demand (SVOD) platform licensed an existing film IP to reboot as a series for kids – let’s call it “Franchise A.” The Franchise A series was exclusive to the streaming platform. However, Franchise A IP was also licensed for a variety of consumer products and books. As NPD tracks data for multiple industries, including viewership on streaming platforms, I’ve blended these into the chart below. 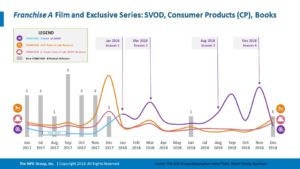 Here is the journey:

Because entertainment is everywhere, IP is also everywhere. Consumers have no interest in product lead times or production schedules. They expect IP ubiquity – films, series, Blu-ray, toys, clothes, books, video games – in as tight, to simultaneous, availability as possible.  The content creators who change their operational structure to prioritize communication and coordination of groups working on the same IP will be orders of magnitude more successful than those who do not.