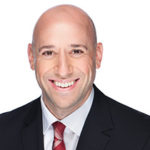 Comcast’s Matt Strauss will join NBCUniversal  as Chairman of Peacock, which launches in 2020. Strauss will also add the Digital Enterprises group to his purview, and report to Burke.